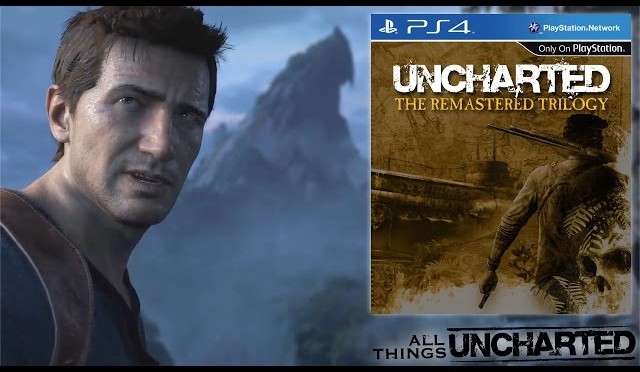 Bryony Stewart-Seume brings All Things Uncharted to Family Gamer to look at the possibility of a PS4 triple pack for the first three Uncharted games.

Since the launch of the PS4 we have seen many games ported to the newer technology, not least one of Naughty Dog’s current IPs; The Last of Us. But who would like a remastered Uncharted collection for their PS4? I know I certainly would, and judging by what people say on the internet; a lot of other people would too. But just how likely is it…?

The internet has been riddled with rumours of this for some time. Sony reported that Uncharted would be a ‘prime’ candidate for remaster almost a year ago and nobody was really surprised.

Since then we have seen some ‘leaked’ box art, which turned out to be a fan’s vision, rather than the actual thing.

More recently a Swiss online retailer rather prematurely advertised an Uncharteds 1-3 HD Collection to be released on 30th September 2015 for PS4, but later pulled the otherwise sparse listing following the explosion of excitement on the internet. Interestingly, the image used in the listing was that same fan made box art we just mentioned.

Another possible clue is that Naughty Dog recently pushed the release of Uncharted 4 back to 2016. Some people have speculated that this is in order to make space in the Christmas release window for a collection of our favourite treasure hunting games, so we have them all fresh in our minds, and to well and truly whet our appetites for Uncharted 4; A Thief’s End. And make more money.

Somehow I don’t think that Uncharted 4 needs the previous titles to sell it; I think it will sell itself perfectly well, although I can understand the lure of playing the first three just before the fourth.

Whether a collection would be, or indeed should be, marketed as a ‘trilogy’ is an interesting point to consider, because Drake’s Fortune, Among Thieves and Drake’s Deception don’t really form one in the truest sense. Although they all fall within a single plausible timeline, there isn’t really a story arc that covers all three, other than of course Nathan Drake’s heritage and ancestry.

Neil Druckmann, in an announcement on the PlayStation blog, talked about how he plans to bring the closure to Nathan’s story that he deserves. If you consider the first three instalments to be a trilogy, then that ‘story’ has already had closure.

So… what is the answer? Well, we don’t know. But game devs, and anyone involved in any sort of planned marketing campaign are all masters of saying exactly what they need to in order to tell the truth, but also say nothing at all. Naughty Dog have gone on record to say that they are not working on this product, but that doesn’t mean no one else is. Contenders include Blue Point Games who regularly make HD collections, and Mass Media Inc, who did the Jak & Daxter PS3 trilogy. Naughty Dog did, however, remaster their own game – The Last of Us, to great critical acclaim. Now it seems, they have enough on their plate.

My honest opinion? Expect to be playing Uncharted 1, 2 and 3 on your PS4 at some point. When? Unless you hear otherwise at E3… we don’t really see it happening this year. It’s a lot of work. The Last of Us Remastered came out merely a year after the PlayStation 3 game, but the chances are Uncharted would take longer and cost more, given the age of the games, and of course, there being three times as many.

Thanks for watching All Things Uncharted on Family Gamer TV, don’t forget to subscribe to catch out next Uncharted episode.