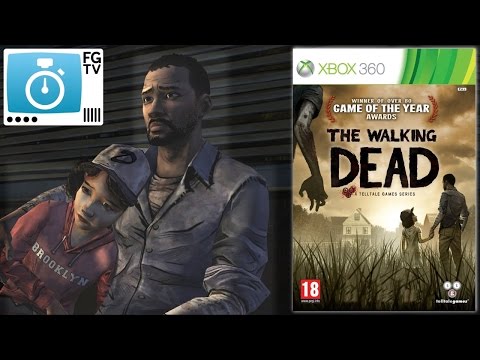 10 things parents should know about The Walking Dead: Game of the Year Edition

1. Genre and story:
The Walking Dead is a point-and-click adventure game, with a strong focus on a story that takes place in the same post-apocalyptic zombie-infested world as the comics of the same name. As protagonist Lee Everett, your interactions mostly consist of exploration, conversation, and some light object-based puzzle solving. Over the course of five episodes, you make narrative choices and develop relationships with other characters, most notably a young girl called Clementine.

2. Developer:
Developer Telltale Games is known for creating adventure games based on existing franchises, and was also responsible for Tales of Monkey Island, Back to the Future: The Game, and more recently The Wolf Among Us. Upcoming games include Tales from the Borderlands and Game of Thrones.

3. Format:
The Walking Dead: Game of the Year Edition is a bundle that contains all five episodes of the first series and the extra episode called 400 Days, though does not include the second series. It is available on disc for PC, PS3, and Xbox 360, but is not yet available for PS4 or Xbox One. Since the graphics are stylised, the main differences between the versions will be the control methods and the achievements or trophies.
There is also a Vita version of The Walking Dead available, but can only be purchased on disc in North America, and is called “The Complete First Season”.

4. Cost:
On most formats, this Game of the Year Edition costs £25 or less.

5. Length:
Each episode takes a couple of hours to play, so the entire collection might take around twelve hours to complete.

6. PEGI/ESRB rating:
PEGI (http://www.pegi.info/en/index/global_id/505/?page=3&lang=en&params=global_id%2F505%2F&searchString=the+walking+dead&global_id=505&id=509#searchresults) has separate entries for each episode of The Walking Dead, but each has the same rating, content warnings, and description: PEGI 18, extreme violence and strong language.
The ESRB (http://www.esrb.org/ratings/synopsis.jsp?Certificate=33201&Title=The%20Walking%20Dead%3A%20Game%20of%20the%20Year%20Edition&searchkeyword=the%20walking%20dead) entry for the Game of the Year Edition gives the game an M rating, with content descriptors for Blood and Gore, Drug Reference, Intense Violence, Sexual Themes, and Strong Language. A long summary of the rating gives examples: “a woman shooting herself in the head”, “a man cutting off his own arm”, “blood-splatter effects”, drug references and “some sexual material in the dialogue”, and swear words like the “f” word and “s” word.

8. Common Sense Media:
Sensibly, Common Sense Media (https://www.commonsensemedia.org/game-reviews/the-walking-dead-season-one) lists The Walking Dead as “not for kids”, highlighting “mature and often scary scenes” and the fact that player decisions “will result in innocent humans getting killed, too, including young children”, though parents and kids apparently both say the game should be rated age 13.

9. Themes:
As Common Sense Media points out, The Walking Dead is a scary game, with constant tension and many jump scares. Lee takes responsibility for Clementine after he finds her alone, with her parents out of town and potentially dead, which might trigger thoughts of abandonment and separation anxiety. The adults in the group of survivors often argue, which could also be upsetting for younger players.

10. Why people play:
As with The Last of Us, the post-apocalyptic setting and extreme violence act as a backdrop to a story focused on its characters and their relationships with one another, most interestingly the adoptive paternal relationship between Lee and Clementine. The Walking Dead asks players to make choices and face the consequences, which range from altered perceptions of Lee to death of other characters, and informs the player of how their choices compared with those made by others. Aside from the story, it’s this reflection of the player that makes The Walking Dead such an interesting game.