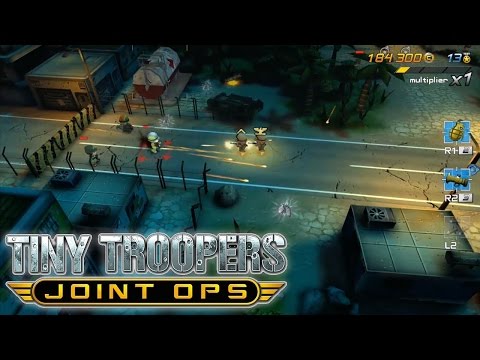 From its name, you might think that Tiny Troopers Joint Ops was a multiplayer game, but it’s not. The Joint Ops part presumably refers instead to the way it combines the previous Tiny Troopers games – Tiny Troopers and Tiny Troopers 2: Special Ops – into one, bringing this mobile game, which has been popular enough to have sold more than 11 million copies so far, exclusively to PlayStation platforms: to PS4, PS3, and Vita.

This is not just a graphical upgrade but a chance to give this arcade shooter proper twin-stick controls, since all three PlayStation consoles have two analog sticks. The Vita also has an additional control option where players can use the touch screen to send forth their soldiers and target attacks.

The premise of this seven-hour single-player campaign is simple: in 58 missions across more than 50 “mini maps”, your job is to have your tiny troops gun down multiple enemies and get out without getting killed themselves. You view the maps from above, though at a tilt rather than a bird’s eye view, and so you can see the area surrounding your troops in all directions. Mastering this game is a matter of multitasking: moving your troops and shooting the enemies while keeping an eye out for others that approach from different directions.

58 missions sounds like a lot, but there’s plenty of variety. The maps are in different locations, some in the day and some at night, with different weather conditions. You can change up your squad by calling on a range of specialists – like the Flamer who comes with a flamethrower or the Medic who automatically heals wounded team members – using the command points you earn for completing missions to hire them for one mission only. You can even use command points to buy your troops new outfits, which have both form and functions like giving you extra health or reducing the enemy’s observation range.

With the bitesize nature of its missions, which will suit that bus ride into town or commute to work, Tiny Troopers Joint Ops will be particularly great on the Vita. Fortunately, we won’t have to choose which console to get it on, as it’ll be Cross-Buy (as well as Cross-Play and Cross-Save) compatible when it comes out later this month.