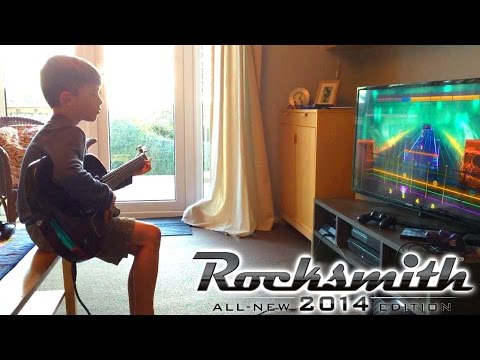 To enter simply perform one of the following (each counts as one entry):
– Follow https://twitter.com/familygamertv and https://twitter.com/geekdadgamer.
– RT via twitter including @FamilyGamerTV
– Leave a comment on the video stating the song you’d like to learn to play.

Winners will be chosen at random and announced via Twitter at the end of the month.

When you hear about a video-game that uses an instrument to control it and you probably imagine a simplified plastic version with buttons rather than strings. However, Rocksmith uses a real guitar to play the game and in so doing teaches players how to play.

The game detects the notes that are being played with the guitar and adjust the difficulty to match the ability of the player. As you progress it moves you from plucking the odd note to playing chords and complex guitar techniques.

As you can see in the video, combine this with some lessons and you have the perfect recipe for learning an instrument. Also, in my household, we don’t have to pester our son to practice. In fact it’s quite the reverse — he pesters us.

Here’s how we started out with the game a few years ago in our family, and in the main video above you can see what it’s like in 2014/2015.