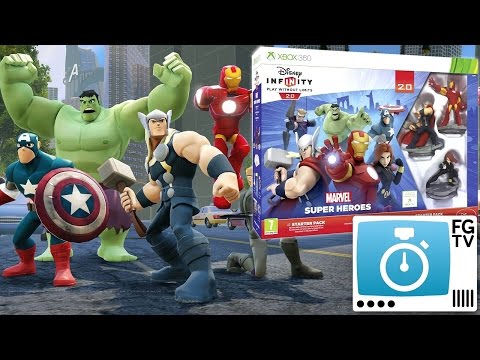 Disney Infinity: 2.0 Marvel Super Heroes – is a Marvel-themed sequel to Disney Infinity, and contains both story-driven action-adventure Playsets and a free-form creation mode called the Toy Box. The game can be played alone or with a friend in the same room, and supports up to four players online in the Toy Box.

Like Skylanders, Disney Infinity supports a range of figurines, in this case Marvel and Disney Originals characters, which players place on a USB peripheral called the Infinity Base to have those characters join the game. Players can expand their game by buying additional characters, Playsets, and upgrades called Power Discs.

Playset campaigns are restricted to specific characters, but all characters can be used in the Toy Box. Collecting coins for particular Marvel characters within a Playset opens up the ability to use that character in the Playset. New to this version of the game are Toy Box Games.

Disney Infinity 2.0 is available for PS4, XBox One, Wii U, PS3, PC and Xbox 360 but not Wii or 3DS. A PlayStation Vita and PlayStation TV are coming soon.

Disney Infinity 2.0 supports three Playset adventures at launch: The Avengers, Spider-Man, and Guardians of the Galaxy. They will cost around £30/$40.

Disney Infinity 2.0 supports three Playset adventures at launch: The Avengers, Spider-Man, and Guardians of the Galaxy. They will cost around £30/$40.

Disney Infinity 1.0 owners can buy an upgrade to access new characters and discs in the 2.0 Toy Box but won’t be able to access the new Playset adventures.

Disney Infinity 2.0 owners can access characters from the first game in the Toy Box mode but won’t be able to access the original game’s Playset adventures.

The story in each Playset adventure should take about five hours to complete, though they also feature side quests that may add to that time. The free-play Toy Box mode is open-ended.

In the UK and Europe, PEGI (http://www.pegi.info/en/index/global_id/505/?searchString=disney+infinity+2.0&agecategories=&genre=&organisations=&platforms=&countries=&submit=Search#searchresults) rates Disney Infinity 2.0 as suitable for those aged 7 and older, with content descriptors for Fear for “pictures and sounds likely to be scary to young children” and Violence that “is set in a cartoon, slapstick or child like setting that could be upsetting to very young children”.

In the US, the ESRB (http://www.esrb.org/ratings/synopsis.jsp?Certificate=33509&Title=Disney%20Infinity%3A%20Marvel%20Super%20Heroes) rates Disney Infinity 2.0 as E for Everyone 10+, with a content descriptor for Cartoon Violence, and a mention of online play. The description describes the combat options available, including things like “vehicle-mounted turrets, oversized machine guns, swords, and lasers”.

Common Sense Media (https://www.commonsensemedia.org/game-reviews/disney-infinity-marvel-super-heroes-20-edition) recommends the game for those aged 10 and older, stating that “given the focus on superheroes, it’s not surprising that the included Play Set (Marvel’s The Avengers) is heavy on fighting, including the use of weapons”, though there’s “no blood or death”, and suggests that kids who don’t like fighting play the Toy Box mode instead. Common Sense Media warns parents to “expect a lot of pressure from kids for additional Play Sets, Power Discs, Game Discs, and figurines”, though points out that all figurines from the first game are compatible with this sequel.

Because of the superhero theme, the game involves various forms of peril, e.g. falling from heights and enemies in a range of shapes and sizes, for instance fantastical creatures with tentacles used to attack the player. This sequel also introduces a semi-permanent death mechanic whereby defeated characters stay defeated until you restart the level.

With so many characters and different modes and ways to play, Disney Infinity 2.0 has plenty of content to keep players busy, and will particularly appeal to those who love Marvel as well as regular Disney. Skylanders proved that the toy-game crossover could work, but adding Disney to the mix made success almost inevitable.