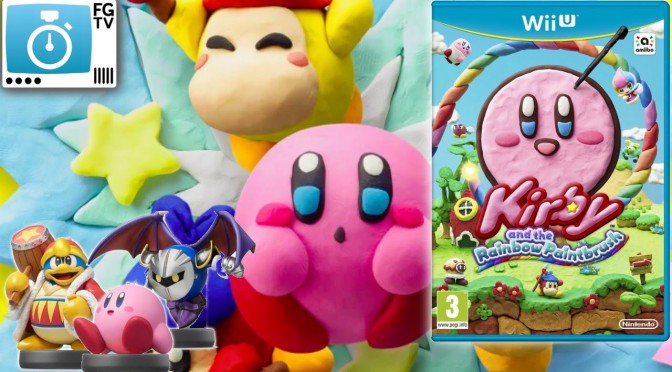 Welcome to our 2 minute guide on Kirby and the Rainbow Paintbrush.

1. Genre
Kirby and the Rainbow Paintbrush – otherwise known as Kirby and the Rainbow Curse – is a 2D platform game for the Wii U. The main player uses the GamePad’s touch screen to draw rainbow ropes, and Kirby rolls along them in whatever direction they’re drawn. A loop of rope increases Kirby’s speed, as does tapping on him. The ropes can also be used to block off enemies or obstacles.

Kirby is a long-standing Nintendo character known for his ability to vacuum up enemies and absorb their abilities. In this game, Kirby is able to turn into a vehicle: a rocket, submarine, or tank. Players can also sometimes use amiibo – Kirby, King Dedede, and Meta Knight – to give Kirby extra abilities.

Up to three players can join in, controlling characters called Waddle Dees with Wii Remotes or Wii U Pro Controllers. The Waddle Dees can run along the rainbow ropes, pick up items, attack enemies, and even pick up Kirby.

Other 2D platforming games for the Wii U include Donkey Kong Country: Tropical Freeze and New Super Mario Bros. U, though they don’t feature a similar drawing mechanic. Kirby: Power Paintbrush – otherwise known as Kirby: Canvas Curse – offered a similar touch-platforming mechanic on the original DS.

A villain called Claycia has stolen the colours from Dream Land, but a magical paintbrush called Elline restores Kirby and his friends to colour and helps them to pursue Claycia to set things right.

Kirby and the Rainbow Paintbrush is only available for Wii U, for around £30/$40. Amiibos cost around £15/$20. Those compatible with this game are: Kirby, King Dedede, and Meta Knight.

5. Duration and Difficulty
The campaign should take no longer than six hours to complete, and is easy enough for young children with some experience with platformers, especially if they have a parent playing along in co op. When playing in co op, players need to work together to ensure no one gets left behind.

6. UK Rating
In the UK and Europe, PEGI rates the game as appropriate for those aged three and older.
http://www.pegi.info/en/index/global_id/505/?searchString=kirby+rainbow

8. Themes
As with all asymmetrical multiplayer games, children may argue over who gets to play as what character, especially as the player controlling Kirby gets to draw on the GamePad screen, but the other characters have more freedom of movement, more like traditional platformer characters.

Children may also ask their parents to buy them the extra three amiibo to use with the game to unlock Kirby’s extra abilities, which will add to the cost of the game.

9. Why people play:
Kirby has been around for more than 20 years, so fans of the character will be glad of a new game in the series. The colourful clay aesthetic is an interesting stylistic choice, and combined with the soundtrack creates an experience more upbeat than some other games.

Even for Wii U owners who haven’t played a Kirby game before, however, Rainbow Paintbrush should appeal for the way it uses the GamePad touch screen, a feature that sets the Wii U apart.