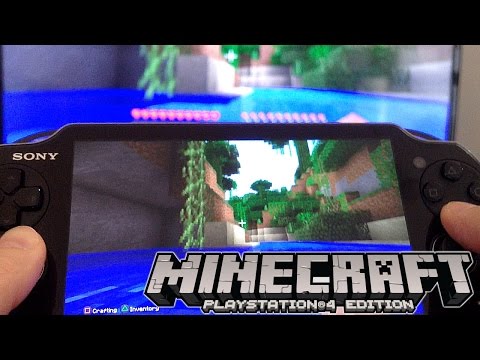 After a long wait, Minecraft for PS4 came out in the UK today, for £12.99 on its own or $3.99 to upgrade from the PS3 version. To help you decide whether you want to upgrade to the next-gen version, or maybe choose PS4 as your first console edition of the game, we’ve made a quick Let’s Play of the first half an hour. I played through the tutorial, because while some viewers will have played previous console versions of the game others won’t have. As someone who has mostly stuck to the Pocket Edition, I was one of them.

However, with the smooth performance, intuitive controls and interface, and improved draw distance making this version look great on my big screen, I may be a convert. The Pocket Edition is still great for when my brothers and sisters and I want to play together on our different devices, but I love how the PS4 version looks and feels. Even those who have the PS3 version already will be impressed by that draw distance and by worlds that are apparently 36 times larger. You’ll even be able to import your saves from the PS3 to PS4, though you won’t be able to send them back again.

If you have any questions about Minecraft for PS4, or if you want to give us feedback or request more videos so that you can get an even better idea of the game, please let us know in the comments. And if you want to know as soon as we’ve got more Minecraft videos to share with you, make sure you subscribe.

For more on the game, check out our two-minute guide: https://www.youtube.com/watch?v=0xhvtBVYkVg