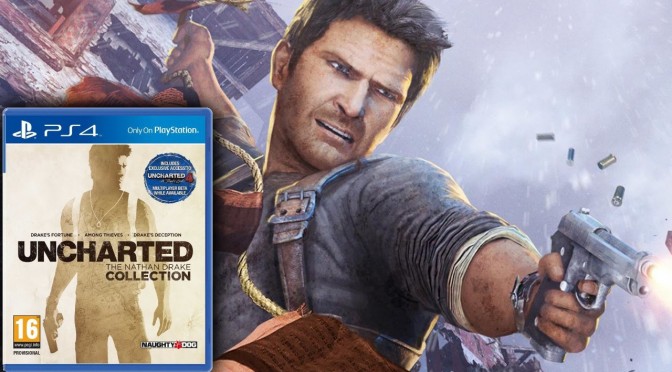 Uncharted: The Nathan Drake Collection is an HD remake for PS4 of the Uncharted trilogy, originally on the PS3.

The trilogy tells the story of treasure hunter Nathan Drake, whose adventures take him all over the world and involve lots of action movie-style danger from both the environment and plenty of enemies both human and otherwise.

In the game, players will control Drake from a third-person perspective as he runs, jumps, and climbs through different environments. He also guns down dozens, if not hundreds, of antagonists.

The story is told through cutscenes and conversation between Drake and other characters who accompany him.

While Uncharted 2 and 3 had multiplayer modes, The Nathan Drake Collection does not, though players will get access to the multiplayer beta for the upcoming PS4 sequel Uncharted 4.

The Uncharted games share many similarities with the new Tomb Raider games like the recently released Rise of the Tomb Raider.

Over the course of the trilogy Drake travels the world tracking down various kinds of treasure, often with supernatural origins and powers. The story often focuses on his relationships, e.g. with on-and-off romantic partner Elena and father-figure Sully.

The original Uncharted trilogy was developed by Naughty Dog, who is also developing the upcoming Uncharted 4, but was ported to PS4 for this collection by Bluepoint Games.

Uncharted: The Nathan Drake Collection costs £49.99/$59.99 on the PlayStation Store.

It could take up to 30 hours to complete the trilogy, longer if players seek all of the collectibles. There are multiple difficulty levels so players more interested in the story can play on easy and have less risk of having to repeat sections.

In the UK and Europe, PEGI rates Uncharted: The Nathan Drake Collection as only appropriate for those aged 16 and older for realistic looking violence and strong language.
http://www.pegi.info/en/index/global_id/505/?searchString=uncharted&agecategories=&genre=&organisations=&platforms=&countries=&submit=Search#searchresults

The GRA expands on its PEGI rating by explaining that the collection contains “frequent moderate violence and occasional strong bad language”. The violence “consists of hand to hand fighting and use of guns”, and although it’s “bloody and there are some injuries” it “lacks any gory elements.”
http://gamesratingauthority.org/GRA/

[Do not include this section in the audio recording]

Use this section to highlight details of the game not already covered by PEGI.

In the US, the ESRB rates Uncharted: The Nathan Drake Collection T for Teen (http://www.esrb.org/ratings/ratings_guide.jsp), with content descriptors for blood, language, suggestive themes, use of tobacco, and violence. The description lists available weapons (“pistols, machine guns, rocket launchers, and grenades”), as well as melee attacks and stealth takedowns (“e.g., choking and neck snapping”), and describes combat as “highlighted by realistic gunfire, large explosions, and blood-splatter effects”. It also provides examples of some sexual innuendo (“is that an ancient Tibetan dagger in your pocket?”), depictions of sexual activity (clothed straddling and kissing), smoking, and swear words (including the “s” word).
http://www.esrb.org/ratings/Synopsis.aspx?Certificate=34073&Title=UNCHARTED%20The%20Nathan%20Drake%20Collection

Lobby group Common Sense Media recommends the collection, but only for those aged 15 and older, describing the trilogy as “hilarious action games with frequent firefights, some blood”.
https://www.commonsensemedia.org/game-reviews/uncharted-the-nathan-drake-collection

As with many games, there seems to be a conflict between the personality of the protagonist – a character with his own moral compass and people he cares greatly about – and the sheer volume of people he kills, which might bother some players.

Since Drake travels to different locations around the world he meets people from many different cultures, and some may not be happy with how they’re represented, especially in scenarios that pit Nathan – who is white – against people of colour.

People play the Uncharted games for the different environments you get to explore, the bursts of action, and the characters and the interaction between them. Like the hero of an action movie Drake might have killed a lot of people, but players still hold him in high esteem.