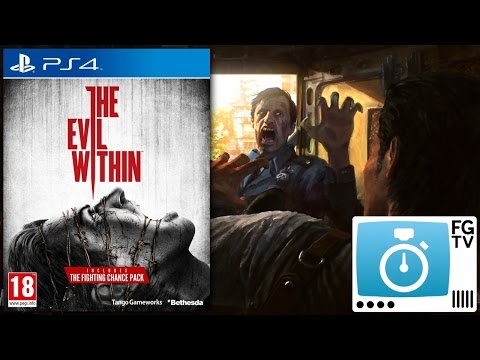 Our 2 minute guide to Evil Within. From what makes this game good to play to what to watch out for here’s everything you need to know.

1. Genre and Story
The Evil Within is a survival horror game where you need to survive while investigating this evil force. While there is combat this differs from an action game – bullets are limited, some enemies are indestructible and running and hiding is often a better course than fighting. There are some role playing elements, including the upgrading of your character’s abilities and weaponry.
You play Detective Sebastian Castellanos, who while investigating a mass murder finds himself trapped in a nightmare world of deranged monsters and the greater evil force behind them. As with the Resident Evil or Silent Hill games there are also puzzles for Sebastian to solve to open doors and make progress as you explore. The Evil Within is a new game, and should make sense for newcomers to the genre.

2. Developer
The Evil Within is developed by Tango Gameworks and directed by Shinji Mikami, creator of the Resident Evil series, the most prominent series in the survival horror genre which Mikami’s helped create.

4. Cost
The standard edition has an RRP of £59.99 on next gen consoles, £49.99 on old gen consoles and £39.99 on PC. A season pass allowing access to three downloadable content packs as they are released costs £14.99, or the packs can be purchased individually for a greater total cost.

5. Length:
The Evil Within is expected to take around 20 hours to complete, with skilled players finishing quicker. Mikami’s games are usually linear, so further play-throughs will remain similar to the first, but also usually reward repeat plays on higher difficulty level with bonuses. Extra downloadable chapters will also be available to buy after release, or via a season pass.

6. UK – PEGI rating and additional consumer information:
In the UK, PEGI rate The Evil Within 18 with content descriptors for extreme violence, violence towards defenseless people and strong language. PEGI describe the game as ‘graphically gory’ with ‘strong graphic violence throughout, the most extreme of which is where [Sebastian] is decapitated by a gruesome monster with a chainsaw. […]The game also contains use of strong swearing including the word ‘f%ck’.’
http://www.pegi.info/en/index/global_id/505/?searchString=the+evil+within

7. US – ESRB:
In the USA the ESRB rate The Evil Within as M for Mature, only suitable for the over 17s with additional content descriptors for blood and gore, intense violence and strong language. The ESRB go on to say that players ‘use knives, pistols, shotguns, and explosives to kill human-like creatures and monsters. The frenetic combat is accompanied by screams of pain and realistic gunfire. Some attacks result in impalement and dismemberment/decapitation, with large blood-splatter effects; some environments also depict blood-splattered floors and mutilated bodies with exposed organs/viscera. Cutscenes also depict intense acts of violence: young characters burned alive; a man decapitated by a guillotine. The words “f**k” and “sh*t” can be heard in the dialogue.
http://www.esrb.org/ratings/synopsis.jsp?Certificate=33602&Title=The%20Evil%20Within

8. Common Sense Media
Common Sense Media describes the game as “Not for Kids for its very mature and graphic content. There are copious amounts of blood and gore within the environments and throughout the gameplay.” They highlight the player’s role in the violence, “this includes everything from manipulating gruesome medical experimental puzzles to killing monsters and humans alike.”

“Needless to say, the use of guns, knives, explosives, and other weapons means that violence within this survival horror game will be at a premium. The game features lots of jump scares intended to terrify and disturb players, and has strong profanity throughout the title.”

9. Themes
The Evil Within is a story of horror and survival, with an underlying theme of the potential for human beings to be driven to do evil things – the barbed-wire tangled monsters have been tortured to make them monsters, and the villain taunts Sebastian about the terrible things he’s going to make Sebastian do.

10. Why People Play
In Resident Evil and Resident Evil 4 Shinji Mikami defined then redefined survival horror, and The Evil Within is a suitably horrific return to the genre. Fans are likely to flock to a game that prioritises scares and tension over the more action oriented horror games of recent years. It’s a game that is definitely for adults only, but grown-up horror fans will find a lot to enjoy here.