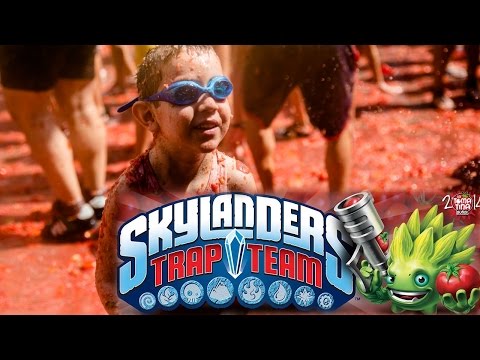 Have a look at this massive tomato fight with Food Fight from Trap Team getting in on the action, followed by a giant sand sculpture of Chaos.

La Tomatina is a famous week-long festival featuring music, parades, dancing and fireworks, among many others activities. This festival is known throughout the world for its famous tomato fight, which brings together more than 20,000 grown-ups each year.

But why should the fun be limited to adults? For the second year in a row, La Tomatina ran a special edition for children, which took place in the main square of Buñol on Saturday August 23.

Food Fight, one of the new characters introduced in Skylanders Trap Team, could not miss an opportunity like this! A veggie warrior, in the shape of an artichoke, he usually reserves his tomatoes for the evil villains of Skylands. However, Food Fight partnered with Tomatina Kids Festival to inspire the action at the tomato-hurling party.

During the celebrations, the young participants took aim with 6,500 kilograms of tomatoes – all in the name of fun!

If you want to join us in donating to Unicef you can do this via the following link:
http://www.unicef.org.uk/Donate/donate-now/

For more unusual Skylanders going on check out what happened last year in the Isle of Skye: