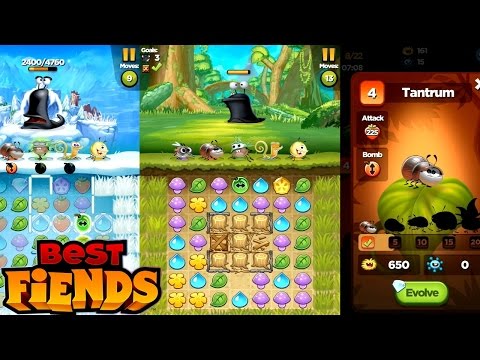 It’s time to pay another visit to the world of Minutia and take on the evil slugs of Mount Boom. This time we’re going to take a look at a selection of the characters available to you, their powers and the costs involved to evolve them. Characters are split into five elements or colours, with three of each type available. You’ll start the game with only Temper, a super strong mite in the plant element, but you’ll soon unlock other characters to flesh out your team.

So far we’ve managed to unlock Brittle, a nervous housefly in the fungi element; Tantrum, a dung beetle engineer in the fruit element; Howie, a clever little lizard in the water element and Kwincy, a big-eyed spider in the flower element. However, the further you get the more characters become available, allowing you to customise your team for the challenges of each specific level. It’s here where we start getting into RPG-lite territory, similar to the options presented in Angry Birds Epic.

With a team of five mighty warriors, we’re better equipped for the various puzzle elements that are introduced in each level and each zone. It’s familiar territory for fans of Candy Crush, who’ll noticed quite a lot a similar ideas at play here. The mesh between match-3 puzzles, RPG customisation and turn-based combat works well, elevating the game beyond the simple frustration that can be present in Candy Crush and it’s ilk, but even though we’ve managed to make it past the first zone of levels quite easily, we’re expecting the difficulty to ramp up soon, as we head deeper into Minutia.