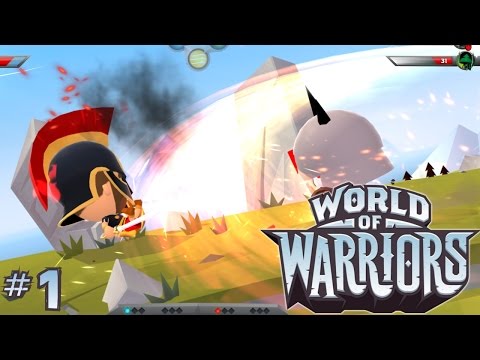 World Of Warriors meshes collectible characters with turn based strategic combat, in a freemium package, that is just sure to get you itching to add another rare character to your team. Those characters appear to be based on many famous warriors from all periods of history and each can be upgraded and tinkered in a lite RPG-style. As you build up your team you’ll gradually increase your chances of winning each particular battle, but your tactics within each battle can be just as important as the warriors you have fighting for you.

Warriors can tag in and out of battles against one or more foes, making use of special abilities and talismans to improve their chances of victory. The battles will take place across a wide variety of environments within The Wildlands, as you fight against the evil cronies of the brutal King Boneshaker. Although very much a single player experience at the moment, PVP and Guilds are on the list of features coming soon. Unfortunately the early access build granted us no access to in-app purchases during our time with the game, but you we’ll bring you more information on that as soon as we have it.

The publishers, Mind Candy, are best known for the smash hit kids brand, Moshi Monsters, so some may find it strange to see them branching out to create a strategic combat game with World Of Warriors. It’s certainly a significant step away from the type of content associated with Moshi Monsters, but whether that prove to be a help or a hindrance, only time will tell. World Of Warriors is currently available for free on Android and arrives on iOS in November.