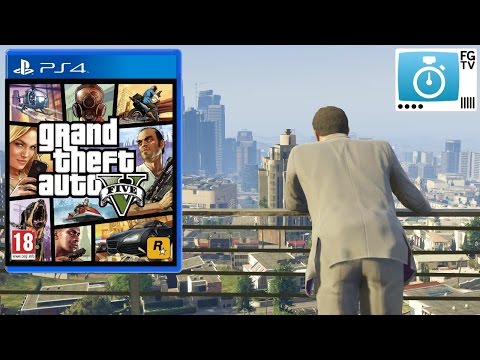 Our Guide to GTA V. From what makes it great to what to watch out for.

1. Genre
Grand Theft Auto V is an action game in which players can travel around one large location taking part in different criminal activities: pulling off heists, with lots of shooting and stealing and driving a variety of cars and other vehicles.

There is no local multiplayer, but GTA V does have an online multiplayer mode in which players can explore that open world together and team up to carry out heists or stab each other in the back.

GTA V is considered a particularly technically impressive example of open-world games, which can be credited to its huge development team and budget. Similar games include Sleeping Dogs, which is set in Hong Kong, and Saints Row IV, which features similar mechanics but openly makes fun of GTA and other games.

2. Story
This is the first game in the GTA series to have multiple protagonists. It tells the stories of three criminals: Michael, a rich former bank robber living under witness protection; Trevor, Michael’s old partner in crime; and Franklin, the youngest of the three. The single-player campaign sees them team up to commit crimes, though their relationships – with each other and with people outside of the group – are heavily tested.

3. Developer
The Grand Theft Auto games are made by Rockstar North, which is based in Scotland. The publisher, Rockstar Games, is also responsible for games like the Red Dead series and L.A. Noire.

5. Duration and Difficulty
The story takes about 28 hours to complete, but there are so many side activities that people could easily play for dozens of hours more, especially if they play the multiplayer. Those with less experience with action games may find it challenging to complete missions in order to progress the story, which may also feel at odds with the open world.

The GRA expands on its PEGI details by explaining that the violence “includes the usual shooting at people, beating them up on the street or running them over with your car”, as well as “scenes of torture using a variety of tools to cause maximum injury to your victim”. The new-gen versions of the game have some new elements including “flaming and explosive bullets. The flaming bullets set the victim on fire and they writhe on the floor screaming until they die.” Language includes the “f” word and “c” word, and there are also “scenes of sex with no visible genitalia, and illegal drug use”. The GRA also points out that the online multiplayer “may involve real-time interaction with other players”.
http://gamesratingauthority.org/pegi/search_aci.html

Lobby group Common Sense Media rates GTA V as “not for kids”. It states that “women are frequently depicted as sexual objects, with a strip club mini-game allowing players to fondle strippers’ bodies, which are nude from the waist up”.
https://www.commonsensemedia.org/game-reviews/grand-theft-auto-v

8. Themes
The Grand Theft Auto games are often called satire, as they parody various aspects of American life like politics and celebrity culture. However, some critics have said that GTA V doesn’t manage to get beyond simple offensive humour.

9. Why people play:
While some will undoubtedly play GTA V because they enjoy speeding away from the cops in a stolen car or carrying out acts of extreme violence, others will be drawn in by the impressive technical achievement that is its open world of Los Santos, closely mirroring Los Angeles, and filled with things to do, whether that’s driving around taking selfies, making money through the stock market, or taking in a round of golf.