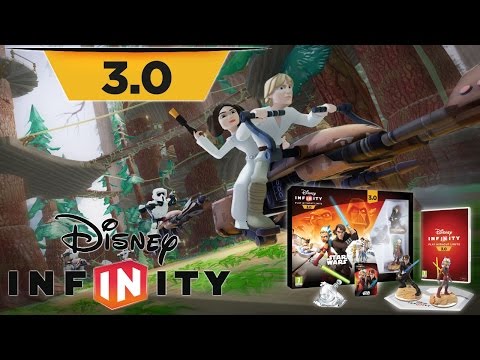 Disney Infinity 3.0 is officially announced today. It includes playsets and characters from every Star Wars movie alongside improved interoperability and secondary playsets for Inside Out and Marvel.

After the first game focused on a wide range of franchises from Cars to Toy Story to Pirates of the Caribbean, Disney Infinity 2.0 took the super hero route with Marvel adventures. This year the focus turns to Star Wars along with functional improvements in both playset and toy box modes. It seems that Disney has been listening hard to both criticism and praise.

The Disney Infinity 3.0 will provide three distinct Star Wars playsets. Episodes I-III, Episodes IV-VI, and the third available this winter based on Star Wars: The Force Awakens. There will also be play sets for Inside Out and Marvel. An enhanced Toy Box with two multiplayer games and more Disney figures like Mickey and Minnie, Sam Flynn and Quorra from Tron: Legacy, Mulan and Olaf complete this year’s offering.

“Disney Infinity is the only game where fans can play with Disney, Pixar, Marvel and Star Wars characters together in one experience,” said James Pitaro, President, Disney Interactive. “We worked closely with Lucasfilm to deliver an authentic Star Wars game experience, featuring some of the most iconic stories and characters from the past, present and future.”

Each of the Star Wars Play Sets offers a different experiences:

– The Star Wars: Twilight of the Republic (Episodes I-III) takes place in the height of the Jedi’s powers, where players will use the Force and Lightsabers alongside Ahsoka Tano, Anakin Skywalker, Obi-Wan Kenobi, Yoda and Darth Maul.
– The Star Wars: Rise Against the Empire (Episodes IV-VI) takes players on galaxy-spanning missions with Luke Skywalker, Princess Leia Organa, Han Solo, Chewbacca and Darth Vader, piloting X-wing fighters or the Millennium Falcon to fight stormtroopers, or exploring land-based missions on planets like Tatooine, Hoth, and Endor.

An important point for families is that you can use all of the Star Wars characters in all of the Star Wars playsets. This is marked improvement from the Marvel adventures that allowed certain characters to cross over. This will take some of the wind out of LEGO Dimensions that is pushing its complete cross compatibility features.

“Star Wars is a cross-generational franchise, and Disney Infinity 3.0: Play Without Limits creates an incredible opportunity for families and fans to relive their favourite Star Wars moments,” said John Blackburn, Senior Vice President and General Manager of Disney Infinity. “With the addition of Star Wars, Inside Out and new Disney and Marvel characters, Disney Infinity 3.0 will be the most ambitious and diverse offering yet.”

Along with the announcement comes a trailer and set of screen shots, this (along with retail and magazine cover images) reveal the following characters: