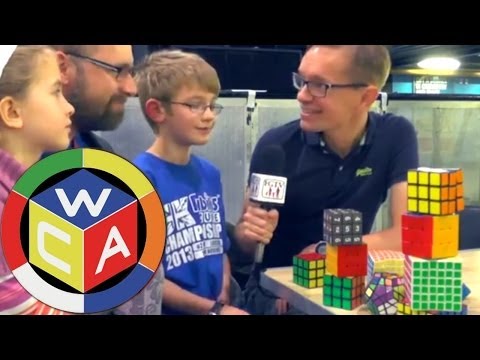 We visit the UK Rubik’s championships 2013, and learn a thing or two about Speedcubing along the way.

Official blurb:
“Sunday 17th November saw a new King of the Cube crowned at Leicester University. Thom Barlow, 25 from Manchester beat off tough competition to be the new UK Champion with an average time of 10.64 seconds! “I’m pleased with my win,” said Thom fresh from his victory, “It was a nerve wracking final, but a fun competition and I am looking forward to defending my title next year!”

Thom was closely followed by Robert Yau, 21 from Guildford, Surrey who managed to solve the Rubik’s Cube with an admirable average time of 11.03 seconds, just missing out on the top spot, landing 2nd place. While in 3rd place sat Sameer Mahmood, 19 from Catford, London with an average time of 11.32 seconds.

This year the UK Championships, sponsored by John Adams, attracted over 100 competitors from 14 different countries. The two-day event took place at Leicester O2 Academy, where some of the best Rubik’s Cube solvers came together to compete in over 10 traditional and non-traditional official cubing events.

The celebrations continued for Sameer, who is currently ranked number two in the world for the 2×2, which he solved in a remarkable average time of just 2.70 seconds. And there was more success for Robert Yau, who nabbed the UK title for solving the Rubik’s Cube ONE HANDED in just 16.24 seconds! While Matthew Sheerin, 22, from Airdire, Scotland, took the stage by storm by solving the most iconic puzzle BLINDFOLDED in an incredible 57.99 seconds.

Taking on the best of the best from the UK and around the globe, the talented Cubers made the solve look simple. Co-organiser Daniel Sheppard, 23 from Guildford also had a successful weekend. Placed 2nd in the Rubik’s 3×3 Blindfolded competition with an average solve of 1 minute 17.73 seconds, he also managed 3rd place in the 2×2 final with an average solve of 3.73 seconds, as well as being placed in the top ten in all his other competitions. A very busy weekend all round for Daniel!

Chrisi Trussell, VP of Rubik’s Brand Ltd. says: “The event was a tremendous success; it is great to see so many Cubers come from all around the world to compete for this prestigious title. Thom deserved the win, it is an incredible achievement, and it shows how intense and competitive Cubing can be.”