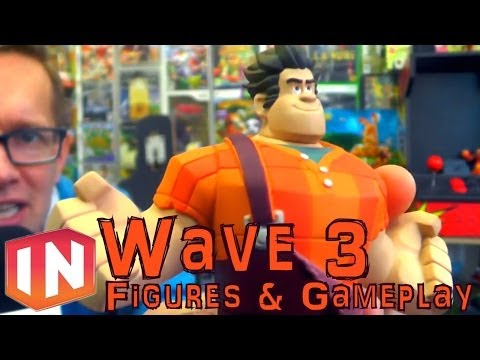 There’s a double edged sword to collectable toy-lines for families. The attraction is that big set of characters to play with, but if there are too many to collect it simply gets too expensive. Disney Infinity is certainly looking a bit more restrained here than Skylanders with fewer figures to collect and a steady stream rather the staccato releases of Activision’s figures.

Accordingly we will start seeing the next few figures for the game arrive in shops: Elsa and Anna from Frozen, Vanellope and Ralph from Wreck-it Ralph and Rapunzel from Tangled. These follow up the recent arrival of Woody from Toy Story and Jack Skellington and will be followed by Mickey from Sorcerer’s Apprentice and (it is rumored) characters from Phineas and Ferb.

Getting the figures in hand again works the Disney magic. Even where these are hugely familiar characters (I’ve not seen Frozen or Wreck-it Ralph yet) the quality and design of the toys is immediately endearing. In fact the franchise traffic flows two ways, with the films encouraging play in the game and the video-game experience giving reason to go and watch the movies.

Vanellope von Schweetz (which is being released as Target exclusive in the US on Nov. 24) makes much of her “glitching” ability. This special effect sees the world of Disney Infinity turned to pixels as she attacks. The diminutive and endearing figure design along with Sarah Silverman being persuaded back for voice work make Vanellope an attractive gaming proposition (and rather cute toy).

Wreck-It Ralph (which is a Best Buy exclusive in the US on Nov. 22) is perhaps the heftiest of Disney Infinity figures. Holding him in your hand it’s hard not to smile or want to take him to the carpet and fight Sully or Mr Incredible. In the virtual Toy Box the Wreck-it Ralph figures also bring in a set of adventures and mini-games. Vanellope has her Sugar Rush race and Ralph has a side-scrolling challenge — complete with retro graphics.

Rapunzel (which is a Walmart exclusive in the US on Nov. 22) captures that sense of carefree young girl. Running around barefoot flinging her signature frying pan at enemies was enough to win my daughter over. She comes with a Tangled themed adventure where you slide along rails and collect the glowing lanterns from the movie.

That leaves Anna and Elsa from Frozen (available both singly and in a double pack). While it’s a shame that neither of them have the movie voice actors (Kristen Bell and Idina Menzel) this really didn’t matter once the kids got playing. Anna is packing a grappling hook weapon that not only hits enemies but is also a handy way to get around the world. Elsa has a Freeze Ball that does a surprising amount of damage. They come with a Toy Box mini-adventure each that may not be as impressive as the others, but offer a nice distraction from the high impact challenges elsewhere.

While my kids were a little puzzled about these characters not having their own fully fledged Play Set, the inclusion of more female figures in the toy-line and the mini-adventures seems to have placated them.

This leaves the new Disney Infinity Series 2 Power Discs for Disney Infinity. The first 17 of the series had already been announced on the Disney Infinity website, but today we had sight of the final three:
– Captain Hook’s Ship
– Condor Wing Glider
– Electric Mayhem Muppet Bus

The final part of the ongoing Disney Infinity puzzle are the more limited edition Crystal figures. These are a range of the original figures in translucent form and limited to particular retailer outlets. I’m not usually a fan of special editions as they can mean that children end up buying duplicate toys to have the complete set.

Here though I do like the fact that the Disney Infinity Crystal figures have a special powers in the game as well — not a million miles away from the Series 2/3 Skylanders figurines. As you can see here I recently spotted a Crystal Lone Ranger in store.