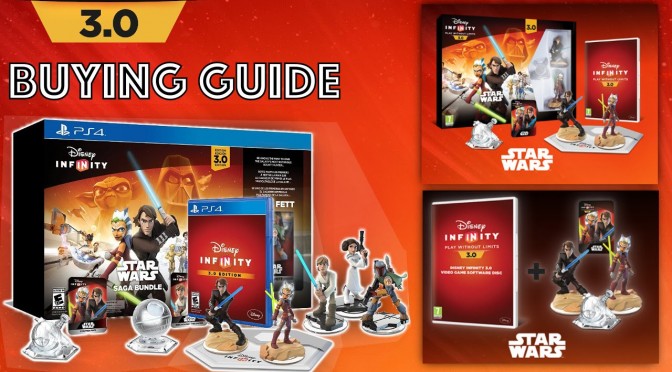 We take a look at the different route to owning Disney Infinity 3.0.

At launch you can only play the classic Episodes IV-VI (Rise Against the Empire Play Set) adventures if you purchase the $114.99 Star Wars Saga Bundle exclusively on PlayStation 3 or PlayStation 4. Also this is the only route to access the Boba Fett figurine and character.

In the UK players with a Disney Infinity 1.0 or 2.0 Starter Pack can purchase just the Disney Infinity 3.0 Video Game disc, and then add either the Twilight of the Republic Play Set or Inside Out Play Set separately and use the base they already own.

In the US there is a Digital Download version of the game that will be available at launch, as confirmed by VP of Production on Disney Infinity John Vignocchi on Twitter. It’s worth noting this because currently it is not listed on Console online stores. Also, as there is no physical version in the US it’s not visible at retail.

The official Disney Infinity page for the UK makes sure that families are aware of the game-only option, stating “Do you already own a previous Disney Infinity Starter Pack? Then the 3.0 Video Game Software Disc with Twilight of the Republic Play set Bundle might be an option for you.” However the page in the US has no mention of a game-only option.

Disney Infinity 3.0 offers great value for families this year, not least with a lower overall price point, no more blind packs and better cross-over features on the Star Wars characters. A bit of research around the points I outline here is still important to identify the right route to purchase.