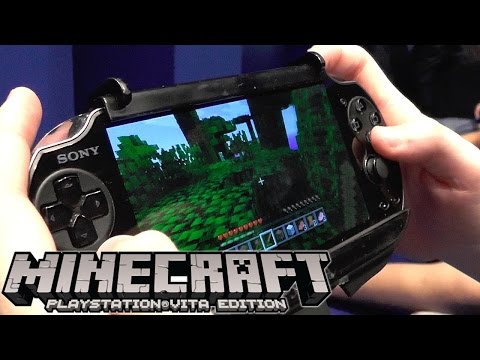 Minecraft fans have been waiting a long time for the game to come to PlayStation Vita. The PS4 and Xbox One versions of Minecraft were finally released recently, but while we’d heard that the Vita version was due in August, 4J Studios Tweeted on the 26th that they had “a bit more work to do” before they could hand it over to Sony. It was playable at gamescom, however, and we checked it out so that you can see how the console version of the game looks on a small screen.

The trailer for Minecraft: PS Vita Edition sums up what’s exciting about this version of Minecraft: those familiar square, circle, cross, and triangle symbols a nod to the patient PlayStation 4 and Vita owners; the map a hint at the sizes of the worlds you’ll be able to hold in the palms of your hands; the two Vitas side by side showing the multiplayer that will work both locally and online; the Nether Portal a reminder that this is not the same slimmed-down version of Minecraft we’re used to on phones and tablets.

When it comes to how the game feels to play, what stands out is the use of those dual analog sticks that mark the Vita as more of what you might call a “hardcore” console than its main competitor the 3DS. Where Minecraft: Pocket Edition – the iOS and Android version of the game – has occasionally clumsy touch-screen controls, here it feels far more natural to move and look around, as you can see as we walk through the trees, the scattering of snow a hint at the varied biomes this version will include. The discovery of a little pool half in light and half in shadow is a reminder that despite its blockiness Minecraft can be a beautiful game.

Minecraft looks particularly good on the Vita’s screen, and seems to run well too, with the world filling in in the background as we emerge from the trees. The draw distance – the distance away from the player to which the world is drawn – might not be as big as it will be in the upcoming PS4 version of the game, but you can see enough around you to get that sense of exploration. As you can see from our time with the game, this version also includes maps, so as you do explore the world you’ll be able to record your exploration and share it with a friend in cooperative play. The worlds might not be as big as those in the new version of Minecraft: Pocket Edition, but they’re big enough to give you plenty to discover.

As well as that sense of physical discovery, Minecraft Vita should also enable discovery of the game itself, as this new version on a new console brings new players to the already incredibly popular game. One thing that’s great about the console versions of Minecraft is their tutorials, and the Vita version is no different. As you can see throughout the video, snippets of text appear in the corner of the screen to tell the player what they’re looking at – like the lilypad – or to give suggestions of what to do. That level of helpful instruction, combined with the portability of the Vita console, makes this version of Minecraft great for showing to friends and family who aren’t yet fans but would like to understand more, maybe even those parents who’d love to know why their kids love this game so much.

For more on the game, check out our two-minute guide: https://www.youtube.com/watch?v=0xhvtBVYkVg