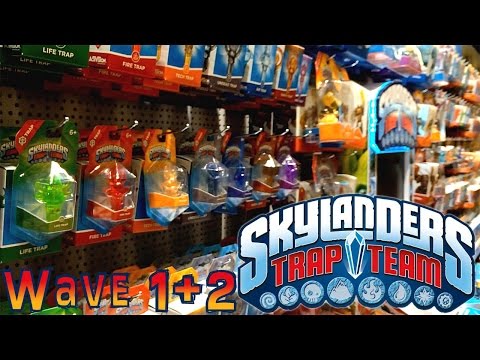 As we eagerly await the October launch of Skylanders Trap Team, more and more information is starting to surface that gives us a good picture of what Wave 1 and Wave 2 of Trap Team will look like. We now have retail images of some of the figures to compliment the packaging we got a look at during Gamescom.

Pulling information from various sources online, we now believe Wave 1 & Wave 2 will be as follows:

In this video we’ll look in detail at a number of these characters, including Legendary Jawbreaker, Nitro Krypt King, Lob Star, Tread Head and Fist Bump, plus the Legendary Nightmare Express and our first look at another adventure pack, The Mirror Of Mystery. We’ve also got some better quality images of the character poster for you too, featuring Rocky Roll, Cobra Cadabra, Thunderbolt, Enigma, Echo, Short Cut, Fling Kong, Blastermind and one of the latest villains to be revealed The Golden Queen!