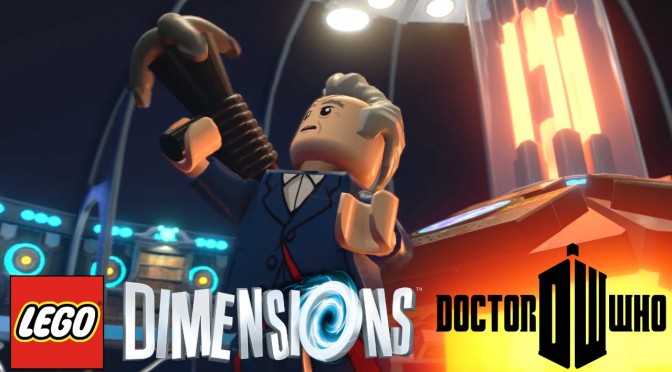 Here it is the new trailer for Doctor Who content in Lego Dimensions.

In a new trailer for this at San Diego Comic Con, Warner not only had Peter Capaldi on hand to show the gmae but also how the Toy Pad modes will work with the Doctor Who characters in the game.

As we saw with the Portal levels at E3, the Toy Pad can operate in a number of different modes – Scale, Chroma, Locate, Shift & Elemental. These are translated into the world of Doctor Who nicely. Whether that’s Scaling Daleks down to size, Shifting the Doctor to a new time-location with the Tardis or lining up colors with the Chroma mode, the physical-virtual cross over is again strong in this level pack.

Along with seeing the Lego minifigure and Tardis up close we also got another look at game-play. Again this looks spot on and crammed full of franchise cross-over characters and teases — perfect the biggest USP of the game.

The trailer shows the TARDIS in Gotham City, Homer Simpson and The Doctor fighting in a Portal level and even some action with Scooby Doo. As previous announced on Twitter, Peter Capaldi, Jenna Coleman and Michelle Gomez voice their characters.

In the Starter Pack Doctor Who has an exclusive level along with an additional Level pack that adds further adventures — and some physical Lego for Capaldi’s 12th Doctor, the TARDIS and K-9. This is also a Doctor Who Fun Pack that adds a playable Cyberman and Dalek.

A nice touch is that if the Doctor dies in the game he can regenerates as any of the 12 iterations of the time lord. Also, the TARDIS interior automatically matches the current Doctor — even in black and white for William Hartnel.

It’s not long to wait before the game’s release now. With Disney Infinity pushing Star Wars and Skylanders Superchargers bringing a new range of vehicle toys the battle for Toys to Life spend will be higher than ever this year.