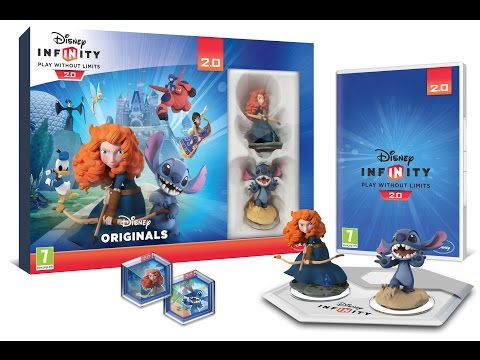 A few months back we brought you news of a Disney Originals Starter Pack, launching on November 4th. Well it seems we weren’t far off the mark, as Disney today announced that they’ll be releasing the Disney Infinity 2.0 Toy Box Combo Pack on that very date. The pack will include the Disney Infinity 2.0 game disc, which is identical to the disc in the Disney Infinity 2.0 Marvel Starter Set, plus two figures, Merida and Stitch. The game disc will allow you to create and play in Toy Box 2.0 and make use of all the great new features to assist you building even better games and worlds.

Also inside the Combo Pack are two Toy Box Game Discs, Stitch’s Tropical Rescue and the Brave Forest Siege. We’re led to believe these games will be either identical or similar to those in the Marvel Starter Pack, with the Stitch themed game being a dungeon crawler and the Brave/Merida themed game being a tower defense game akin to the Marvel Toy Box Game set in an Asgard themed world.

Parents should be aware that there is no playset piece in this pack and you will get another Disney Infinity Base. Apart from the Xbox One, all Disney Infinity 1.0 bases work with Disney Infinity 2.0 and if you’re thinking of picking up the Marvel Starter Pack as well as this, you could end up with two identical game discs and three infinity bases. Also, outside of those two packs and the playset packs, all figures will be sold separately. Due to a lack of popularity, Disney are doing away with triple packs for the time being and there’s no word yet if we’ll see the double character packs we saw alongside Disney Infinity 1.0 either.