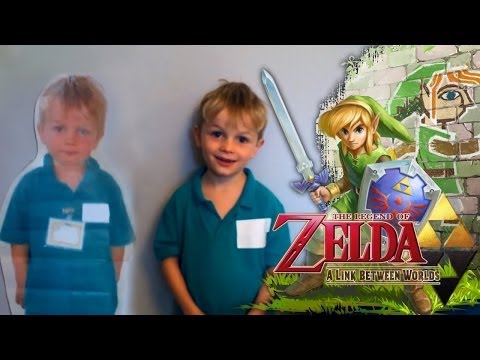 We spend some time with the family playing through The Legend of Zelda Link Between Worlds. What started off as a gaming project turned into a craft and creativity time as my son recreated Link’s paper-powers in real life.

Over the years Nintendo games have done a great job at crossing that divide, perhaps none more so than Zelda. Spend even a few hours with Link and it’s impossible to deny the artistry involved here.

In my family this has been evident in more than gameplay alone though. I wrote previously how Wind Waker HD spilled over into craft and creative time as my son (6) took to drawing Link and Zelda in his art lessons at school.

The Legend of Zelda Link Between Worlds has, true to its name, extended this relationship between my children’s virtual adventures in Hyrule and physical creativity at school. I came in from work the other day to be greeted by my son running off into the sitting room. Curious about what he was up to I followed him through the door, to find a full size paper version of him staring back at me.

Once I had got over the initial surprise and been met by his grinning face emerging from the sofa, I realised that this was something he had made at school. As you can see in the video, a perfect Link Between Worlds re-creation of himself in paper form.
This may seem just like a bit of fun, and it certainly is that. But also it’s more than that. Seeing how games inspire families to new creative endeavours, and offer them a fresh resource of stories and tales to fire their imaginations makes me want to embrace all they have to offer.

The Legend of Zelda: Link Between Worlds is not only a great new Zelda experience we are happily working our way through together, it’s also another nail in the coffin of the idea that all video-games have to offer families is some entertainment to keep them off the streets, or muddy fields.
Content supported by Nintendo, including access to the game.