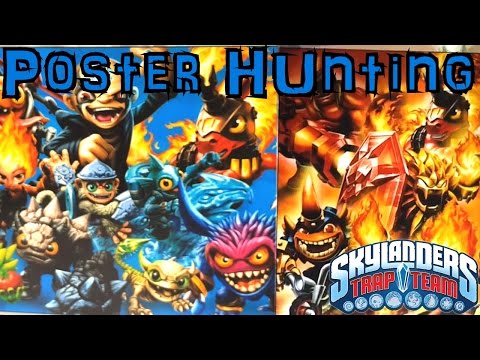 In this first of two exclusive videos from Gamescom 2014, we look at the Skylanders Trap Team Popup Shop, which was there to showcase all the upcoming releases and associated merchandise. In the first part, we’ll catch a glimpse of some of the Skylanders that we revealed in our recent poster analysis video, including Echo, Enigma, Trail Blazer and Fist Bump, which appear on posters, stickers and tattoos that will be available to support the game.

There’s also an early look at the wooden trap box that you’ll be able to buy to keep all of your villains safely locked away. With over 16 different trap designs to collect, it’s soon going to become difficult to know which villain is trapped inside which trap. This box will allow you to keep them all nicely ordered so that you always know which trap to use at any crucial point in the game.

Also on show, along with a change in figure packaging (which we’ll go into more detail about in part 2), was the all new Trap Team carry bag from Power A. Similar in style to those that accompanied previous games, this one looks just about big enough to hold all your Trap Masters and is perfectly styled like a treasure chest. Skylanders are valuable after all and they need to be kept secure and safe away from Kaos evil clutches (or your friends’).