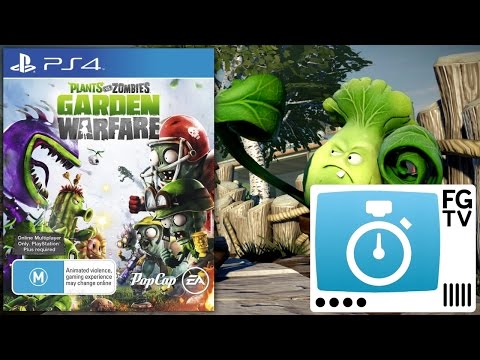 10 things families should know about Plants vs Zombies Garden Warfare, the highs and the lows all condensed into 2 minutes.

1. Genre and story
Plants vs Zombies: Garden Warfare is primarily a tower defense game, which means that your job in the game is to protect your garden from waves of zombie attacks using whatever weaponized plants you have at your disposal. The twist in this version of Plants vs Zombies is that you also get to control the plants directly in a third-person view. So rather than having the static plants we’ve seen in the mobile versions of Plants vs Zombies, this time you can get right into the thick of the action and move around the environment, taking out the zombies yourself.

The game is multiplayer only, but comes packed with nine different game modes and can be played cooperatively or competitively, with players working on the same team or against each other. Beyond the general melee of a plant vs zombies battle, there are unique challenges for each type of character in the game. Completing these challenges will enable the character to rank up and allow the player to access unique upgrades, new characters, weapons and clothing.

2. Developer:
The developers — Popcap Games — have been responsible for all of the previous Plants vs Zombies games, as well as the smash hit title, Peggle.

3. Platforms:
Although Plants vs Zombies: Garden Warfare was originally released as an Xbox One and Xbox 360 exclusive, it’s coming to PS3 and PS4 on August the 19th.

5. Length:
As Plants vs Zombies: Garden Warfare is a multiplayer only title, you could play this forever…or at least until they turn the servers off that run the game.

6. PEGI/ESRB rating:
This game has a PEGI 7 rating in Europe and a Everyone 10+ rating in the United States, which means it is suitable for players aged 10 and over. The Entertainment Software Rating Board provides the following content descriptors to justify the M rating: “Animated Blood, Crude Humor, Fantasy Violence”.
http://www.pegi.info/en/index/global_id/505/?searchString=Plants+vs+Zombies+Garden+Warfare&agecategories=&genre=&organisations=&platforms=&countries=&submit=Search#searchresults
https://www.esrb.org/ratings/synopsis.jsp?Certificate=33271&Title=Plants%20vs.%20Zombies%u2122%20Garden%20Warfare&searchkeyword=Plants%20vs%20Zombies%20Garden%20Warfare

10. Why people play:
Multiplayer action games that are suitable for children and young teens are few and far between. This one comes attached to a huge gaming brand that allows fans of the Plants vs Zombies games to finally jump into the action themselves and experience all their favourite characters in a 3D environment.