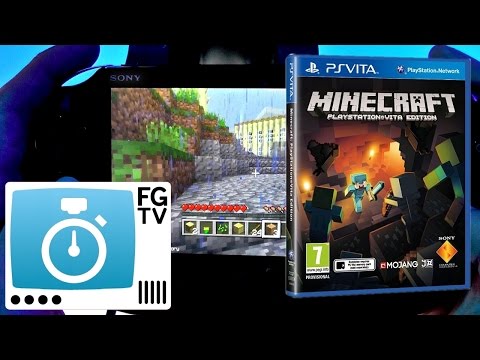 1. Genre and story:
Minecraft is a game so popular it has become a household name. Perhaps most easily understood as the Lego of video games, it consists of procedurally generated worlds formed of blocks that can be used to make things: mine some iron and make an axe, use the axe to chop down a tree, use the wood to build a chest, and so on. You can choose to play with threats to contend with, surviving with the help of what you craft, or just focus on creating whatever your imagination comes up with.
There are a few versions of Minecraft. This new Vita version falls into the same category as the 360 and PS3 versions, the “console” version of Minecraft. The original PC version has the added benefit of mods and the like. Pocket Edition, the iOS and Android version, is convenient but missing some features and fiddly to control with a touch screen. The Vita version has the benefit of portability but with the added bonus of analog sticks and button controls.

2. Developer:
Minecraft is owned by Mojang, but the console versions of the game are developed for them by 4J Studios.

4. Cost:
Minecraft for Vita will be sold on the PlayStation Network as “Minecraft: PlayStation 3 + Vita Edition”, for $19.99. We don’t have a UK price yet, but at today’s exchange rate that’s £11.68. Through PlayStation’s “Cross Buy” buying either the PS3 or Vita version of the game gets you the other for free.

5. Length:
While Minecraft does have a location called The End, the amount of time it might take a player to get there varies wildly, and most people play for hours and hours with their own goals.

6. PEGI rating:
PEGI (http://www.pegi.info/en/index/global_id/505/?searchString=minecraft) doesn’t have a rating for the Vita version, but rates all other console versions – including the PS3 version – a 7+, citing “non realistic looking violence towards fantasy characters” and “characters which although human are not very detailed”.

7. ESRB rating:
ESRB (http://www.esrb.org/ratings/synopsis.jsp?Certificate=33393&Title=Minecraft%3A%20Playstation%AE3%20Edition&searchkeyword=minecraft) also doesn’t have a rating for the Vita version but rates Minecraft: PlayStation 3 Edition as Everyone 10+, with a content descriptor for Fantasy Violence. It summarises the game as a “puzzle-adventure game in which players mine pixilated landscapes to harvest stylized cube-like materials”. They highlight that players “avoid hazards” and “craft weapons (e.g., swords, axes, and bows) to occasionally defend against monsters (e.g., zombies, wolves, and giant spiders)”, and that “mild explosions are occasionally heard as players use dynamite to fend off creatures and mine the environment”.

8.Common Sense Media:
Common Sense Media (https://www.commonsensemedia.org/game-reviews/minecraft) groups the PC and console versions of Minecraft together. Again, the cartoon violence is highlighted: “players will encounter aggressive monsters they can fight using swords and bows”, and “there is no blood or gore, but the creatures can be a bit scary”. Common Sense Media makes worries about online play explicit, saying that “players could encounter offensive content in the form of profane text messages and suggestively shaped player-created structures”. Parents and kids agree that the game is appropriate for those aged 8 and older.

9.Themes:
Minecraft includes the option to craft weapons and use them against animals, monsters, and other players, but all these characters are unrealistic and there is no blood or gore. While the player won’t experience violence their character can still be harmed by the monsters that come out at night, and children sensitive to “ghost story” themes may find the sense of foreboding as darkness falls unsettling.
Parents should consider moderating their children’s online play, perhaps only letting them play with people they know so as to lessen the risk of inappropriate content. Minecraft videos are very popular on YouTube, and can often contain swearing and adult humour. Parents may want to watch these with younger children and make sure they have set up parental controls for YouTube.

10. Why people play: Playing Minecraft as a survival game, finding and using resources to build a shelter in which to hide from the monsters that come out at night, is great fun, especially in multiplayer, whether that’s online or with people in the same room. But for many people, the real joy of Minecraft is in using it, like Lego, to make things. Given that the game is being used in schools, parents who don’t know much about it should take some time to explore it for themselves.