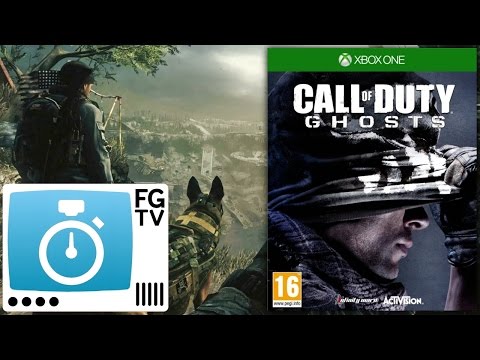 Welcome to Family Gamer TV and everything families need to know about Call of Duty: Ghosts, from the violent content to why it’s such a popular franchise. Here’s our 2-minute guide.

10 things families should know about Call of Duty: Ghosts, the good and the bad in two minutes.

1. Genre and story:
Call of Duty Ghosts is a first person shooter (FPS), which means you play the game in a first person perspective with your weapon and aiming reticle visible at all times. Playing as a member of the Special “Ghost” Ops team from the US you must prevent a South American federation of forces from capturing and using a US missile defence system, currently in orbit, against the USA.

2. Developer:
Developers Infinity Ward, founded the Call of Duty series and are responsible for developing many of the games in the series such as the popular Modern Warfare sub series and Call of Duty 1 & 2.

3. Platform:
Call of Duty Ghosts is the first in the series to be released on both new and previous generation consoles, meaning it’s available for the PC, Wii U, Xbox 360, Xbox One, Playstation 3 and Playstation 4.

5. Length:
Like previous games in the Call of Duty series, Ghosts contains a short 5-6 hour single player campaign and a multiplayer mode that can be played indefinitely. Call of Duty games are primarily purchased for this multiplayer aspect.

6. PEGI/ESRB rating:
The game has a 16+ PEGI rating in Europe and a Mature ESRB rating for North America. The content descriptors are “Blood, Drug Reference, Intense Violence and Strong Language”
http://www.pegi.info/en/index/
http://www.esrb.org/ratings/synopsis.jsp?Certificate=33110&Title=Call%20of%20Duty%3A%20Ghosts&searchkeyword=call%20of%20duty

7.GRA consumer information:
The Games Rating Authority describes the game as having “frequent violence… use of weapons from knives to guns, missiles and larger weaponry to take on enemies both human and mechanical. Blood detail is restricted to blood splashes with no facility to dismember or decapitate targets. The occasional use of f**k in the dialogue”
http://gamesratingauthority.org/pegi/search_aci.html

8. PEGI/ESRB detail:
The ESRB details the content of the game further saying “battles are accompanied by realistic gunfire, screams of pain and frequent explosions. Players can perform close-up attacks (neck stabbings, headshots) Large blood-splatter are frequently depicted.”
“Cutscenes also depict intense acts of violence: a bound soldier shot in the chest; characters executed at close range; civilians gunned down in a space station.”
“In multiplayer, players can select emblems for character customisation; a few are suggestive of marijuana. The words f**k, s**t and a**hole can be heard in the dialogue”
http://www.pegi.info/en/index/
http://www.esrb.org/ratings/synopsis.jsp?Certificate=33110&Title=Call%20of%20Duty%3A%20Ghosts&searchkeyword=call%20of%20duty

9. Common Sense Media:
Parents and children on Common Sense Media think the game should be rated 12. Common Sense Media also describes the characters you play as “…clearly cast as heroes, but virtually all their actions revolve around violence, and they often seem to take pleasure in their work”
https://www.commonsensemedia.org/game-reviews/call-of-duty-ghosts

10. Why people play:
Call of Duty is a very popular franchise and although players enjoy the high quality visuals and frenetic pace of the single-player portion of the game, most play it for the online multiplayer. Here, a levelling up system keeps players engaged and coming back for more. It can also foster teamwork skills and players often form ‘clans’ to play matches against other teams. Matches can be competitive and online chat is unmoderated.