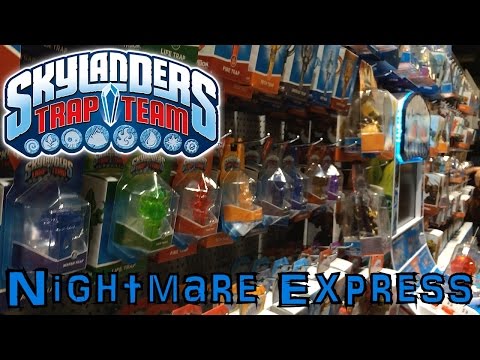 Want to know what it will be like walking into stores in October to buy Skylanders Trap Team, well we can show you right now with our in store look at packaging,characters and merchandise.

We also look at a big display outside the store with Skylanders figures including Eon’s Elite figures in packaging.

In this, the second of our exclusive Skylanders Trap Team Popup Shop videos, we take a close look at the figures that are likely to make up Wave 1 in the release schedule, examining the changes to the packaging in greater detail, along with a few other glimpses of characters we’ve not see in the flesh before.

Trap Masters show the most dramatic change in packaging with a wrap-around clear plastic surround that helps show off these larger figures to greater effect than we saw with Giants and Swap Force figures. Changes like this are sure to go down well with retail partners and collectors alike, who can now show off these new figures to their fullest.

We also get a look at a number of the Mini’s double packs, which you’ll see are themed per element. So you’ll be able to pick up packs containing the following combinations:

These combinations may prove troublesome for those that already own some or all of the Sidekicks, but for collectors, I’m sure they’ll appreciate the presentation.

Along with all of the single figure packaging, we also get a look at the first Adventure Pack, The Nightmare Express, which comes with the Air Skylander, Blades and two Magic Items, Piggy Bank and Hand of Fate. Blades also features in the first triple pack alongside Tidal Wave Gill Grunt and Torch. This combination of packs and figures is a fine balancing act for Activision. On one hand they’re giving consumers a variety of choices, but to get the best deals on figures, it would often mean getting duplicates. This might be fine for collectors, but parents should be wary when they think they’re getting a good deal.