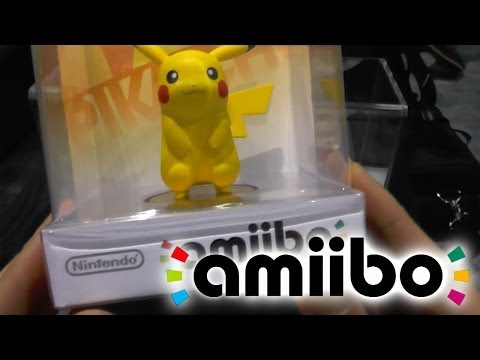 We take a close look at Nintendo’s toys to life figures, amiibo. These are Nintendo characters that are brought into the game via collectable toys. The figures use the same technology as Skylanders and Disney Infinity although can use the existing NFC feature of the Wii U Game-Pad.

As you can see we had the figures in hand in the preliminary target packaging. It was great to see how they felt and get an impression of what they would look like on store shelves.

The Amiibo toys will be compatible across different games. Mario Kart 8, Captain Toad: Treasure Tracker, Mario Party 10 and Yoshi’s Woolly World were the next four mentioned with plans to bring the technology to the 3DS via a NFC peripheral in 2015.

The toys-to-life category as a whole is extremely strong on Nintendo platforms, and Nintendo’s approach with amiibo adds another dimension to the category. Not only can amiibo interact with a particular game, but a single amiibo will continue to entertain in surprising ways as they can be designed to be compatible across multiple games. Additionally, the Wii U GamePad controller shines in a slate of unique interactive games from Mario creator Shigeru Miyamoto.

amiibo: Figures of Nintendo characters can interact with multiple future Wii U and Nintendo 3DS games in unique new ways, providing fresh game-play experiences and a great value for consumers with compatibility across multiple games. Fans can buy and collect amiibo, to bring them closer to the games and characters they love. By the end of the year, Nintendo’s foray into the toys-to-life category will inject energy into the genre. Nintendo will launch amiibo with around 10 figures. More will be launched during the winter season and throughout 2015. Super Smash Bros. for Wii U will be the first game to support amiibo. Other games that will support amiibo include Mario Kart 8, Captain Toad: Treasure Tracker, Mario Party 10 and Yoshi’s Woolly World, with more to come. A new NFC reader/writer being designed for Nintendo 3DS is scheduled to launch in 2015.