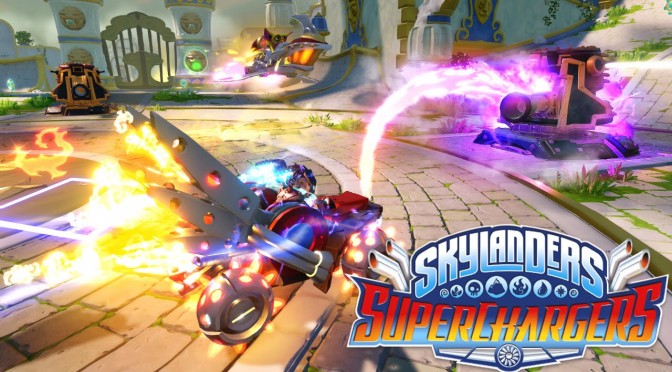 Skylanders Superchargers, launching on September 25th, is the fifth entry in the Skylanders franchise, bringing with it new innovations to game in the form of supercharged land, sea and air vehicles. Featuring 20 vehicles and 20 accompanying Supercharger Skylanders, players can expect an expanded gameplay experience that builds on everything they love about the existing titles.

10 of the Supercharger Skylanders will be re-imagined versions of classic characters, with Stealth Elf, Trigger Happy and Terrafin confirmed as returning.

These aren’t your normal reposed versions though, these returning characters have a whole new look and whole new abilities. Sure Shot Stealth Elf (also possibly called Super Shot) is the first of these we’ve seen new gameplay for and you can see that in combat, she’s a completely different proposition.

Although any character from the 300+ Skylanders currently released, can drive/fly/pilot the vehicles, each Supercharger Skylander, whether they’re old or new, pairs up with one specific vehicle for even bigger boosts and cool modifications. The mods don’t stop there though, with Mod Chests available throughout the levels with which players can customise the look and abilities of their vehicles on the fly.

The Supercharger Vehicles are where Skylanders really brings the innovation though, with areas of each level devoted to specific types of vehicles. The Starter Pack comes with Hot Streak, but players can expand their experience with the game by purchasing air and sea vehicles like Sky Slicer and Dive Bomber. Pair those them with the Supercharger Skylanders, Stormblade and Dive-Clops and you’ll get even more benefits.

Vehicle gameplay is restricted to specific areas in the game, much like the Swap Zones in Skylanders Swap Force, with co-op gameplay supported in a Mario Kart Double Dash style, with one player driving and one player controlling the vehicles weapons. The vehicles aren’t just restricted to simple racing however, with many puzzle elements available specifically for the vehicles.