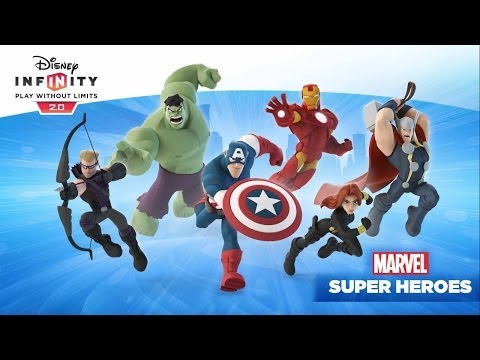 A new line of physical interactive Marvel figures are again used to access in game characters. Alongside these are the all important Play Sets, the adventures of Disney Infinity.

This time they are written this time by Marvel comic writer Michael Bendis players will play as more 20 Marvel characters including Captain America, Iron Man, Black Widow, Thor, Hulk and Hawkeye (provided they have purchased the related figurine) to battle enemies, complete challenging missions, solve puzzles and ultimately save the world from destruction.

The Toy Box is getting a bump as well with new structured, franchise-themed adventures that players can customize and play using any in-game character from across the Disney Infinity universe.

A new Creator tool helps players build worlds faster and easier. Add to this the hundreds of unlock-able Marvel-themed items, locations, props and characters and there is the raw material to create all manner of experiences.

New pyramid shaped discs deliver franchise-themed games to the Toy Box too. Build and customize your games by using Toy Box Toys of your choice and play through each game using any Disney Infinity character to complete missions.

Disney Infinity 2.0 starter packs will be available in the fall on PlayStation 4, PlayStation 3, Xbox One, Xbox 360, Wii U, PC, iOS.