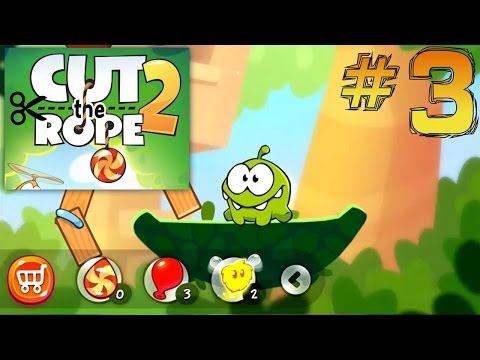 We get our hands on the first five minutes with the new “Cut The Rope 2″ game for tablets and smartphones.

Official Blurb:
“ZeptoLab to launch Cut the Rope 2 worldwide on December 19, Cut the Rope® sequel will debut as an iOS exclusive with 120 levels, new characters and Gameplay

Today, ZeptoLab® has announced the launch of Cut the Rope 2: Om Nom’s Unexpected Adventure™, the sequel to the gaming phenomenon that has captivated hundreds of millions around the world. Cut the Rope 2 will be available to players worldwide on December 19 as an iOS exclusive. To celebrate this holiday launch, the game will initially be priced at 69p on iPhone, iPod touch and iPad. The Android version will be released early next year as a free-to-play game.

Cut the Rope 2 introduces 120 levels of new challenges and gameplay elements, including the ability to interact with Om Nom® and move him on-screen for the very first time. Players will also encounter new characters, the Nommies™, whose special characteristics will help Om Nom collect more candy as he journeys through never-before-seen locations, including a forest, junkyard, city park, sandy dam and underground.

As players look forward to Cut the Rope 2, they will notice something unexpected in the original Cut the Rope – Om Nom has gone missing from the game. Om Nom’s familiar face has been replaced by the image of mischievous spiders and a question mark icon that leads to an in-game countdown to Cut the Rope 2.
ZeptoLab is celebrating the launch of Cut the Rope 2 by introducing even more new content for the holiday season:

– Cut the Rope: Time Travel, the prequel to Cut the Rope, now features the Wild West era, available for free, and The Future era, which players can access for free by collecting three stars in previous levels or by purchase
– As a special treat, Cut the Rope: Holiday Gift is available on Android for the first time as a free download, and is also free on iOS
– Fans of Cut the Rope: Experiments will also enjoy new game content in December, as ZeptoLab releases Bamboo Chutes for iOS and Android