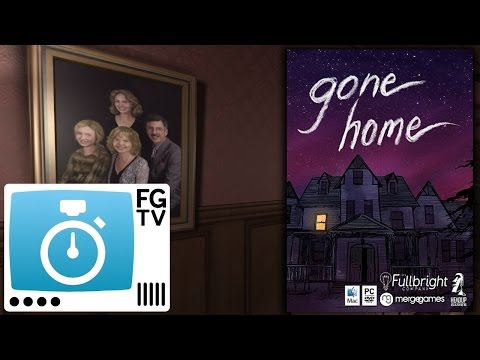 1. Genre and story: Gone Home is a first-person game with a focus on uncovering story through exploration. There is no combat, and since there are no other characters present there is no dialogue. You play Kaitlin Greenbriar, who has just come back from a gap year to find her family’s new home empty, her parents and younger sister absent. You find out where they’ve gone by exploring the large house, picking up objects and reading notes, and listening to the audio recordings that sometimes come with them.

2. Developer: This is the first game from The Fullbright Company, an independent studio that includes developers who’ve previously worked on games like BioShock 2, specifically its Minerva’s Den DLC.

3. Format: Currently only available on PC, Gone Home was originally released digitally through services like Steam but got a special boxed edition on July 3rd.

5. Length: It takes around three hours to get to the end of Gone Home, which might lead some to question its value for money. But where other games hold their value in fun mechanics that stay fun for hours, Gone Home gets its value from its story.

6. PEGI/ESRB rating: PEGI rates Gone Home as suitable only for those aged 16 or over, highlighting strong language.

9. Themes: Younger players may find the premise of the game unsettling, given that the main character returns home to find her family gone, which might trigger thoughts of abandonment or separation anxiety. The game also plays with horror tropes to purposefully suggest that the story is going in a different direction than it does, potentially the most distressing being a bathtub covered in red hair dye that could be mistaken for blood. Since the story is about a family, there is also some discussion of several common themes such as relationships, sex, and religion.

10. Why people play: With its lack of any combat, puzzles to solve, or even other characters to interact with, Gone Home is different from what people might expect from a video game. Some may want to argue that it may as well have been a book, and the story does end the same way every time, but since players have some freedom in how they explore the house and what they pick up, the process of discovery – and the amount of information discovered – can be different each time. It’s a great example of how simple exploration and interaction can be used to tell a story, and that story itself is one that will be meaningful to anyone who has a family or has ever been in love.