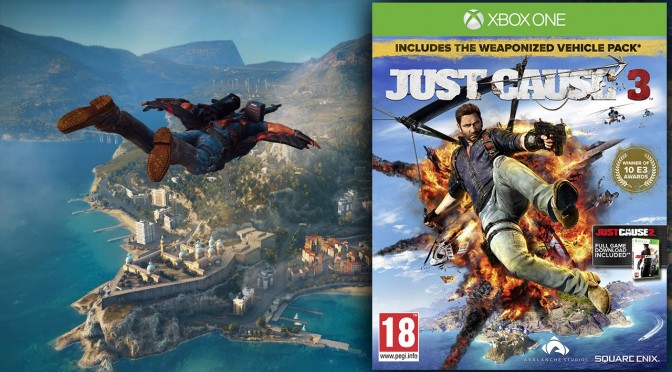 Family guide to Just Cause 3.

Just Cause 3 is an open-world action-adventure game in which you use a variety of vehicles and tools to travel around island environments, carry out story missions that often involve shooting or blowing up enemies, or just play with a physics system that lets you destroy entire buildings.

Throughout the game, players make use of a range of weapons and other tools, like a grappling hook that enables faster traversal.

There is no multiplayer.

Rather than attempt to tell a realistic story like the recent Grand Theft Auto V – also an open-world game – has leaned towards, Just Cause 3 is about over-the-top characters and abilities.

In Just Cause 3 you play as Rico Rodriguez. A few years after the events of Just Cause 2 he has returned to the country of his birth, Medici, to liberate it from a dictator called General Di Ravello. However, the exaggerated story is not the focus of the game.

Developer Avalanche Studios, not to be confused with Disney’s Avalanche Software, also made the previous Just Cause games as well as the recent Mad Max game.

It could take players around 20 hours to complete the main story, but because of its open world it has high replayability.

In the UK and Europe, PEGI rates Just Cause 3 as only appropriate for those aged 18 and older for multiple, motiveless killing and strong language.
http://www.pegi.info/en/index/global_id/505/?searchString=just+cause+3&send=Search

The GRA expands on its PEGI rating, by explaining that “Violence in the game is caused by a variety of weapons, which include pistols, machine guns, explosives and a grappling hook. Whichever weapon is used characters will fall limp with a blood effect and groaning sound. The player can choose to attack anyone in the game, including innocent civilians.” There is also use of the “f” word.
http://gamesratingauthority.org/GRA/

In the US, the ESRB rates Just Cause 3 M for Mature (http://www.esrb.org/ratings/ratings_guide.jsp), with content descriptors for blood, intense violence, and strong language. “Players use pistols, machine guns, rocket launchers, and explosives to attack and kill enemy forces. Action can be frenetic at times, highlighted by realistic gunfire, large explosions, and cries of pain. Successful hits are accompanied by large blood-splatter effects. Some sequences allow players to kill captives and civilians; one sequence allows players to detonate a bomb on a pedestrian. The word “f**k” appears in the dialogue.”
http://www.esrb.org/ratings/Synopsis.aspx?Certificate=34140&Title=Just%20Cause%203

Rodriguez seems to fill a vigilante-type role, attempting to deal with villains in his own way, but any consideration of the politics and ethics comes second to the extravagant destruction.

While the aim of Just Cause 3 is to provide players with a big playground filled with toys without the politics, the story is undeniably political. The setting is fictional, but there are dictators in the real world too.

The Just Cause series is known for the level of destruction it allows the player to wreak. People play it for the freedom it allows you to do what you want with the tools provided.