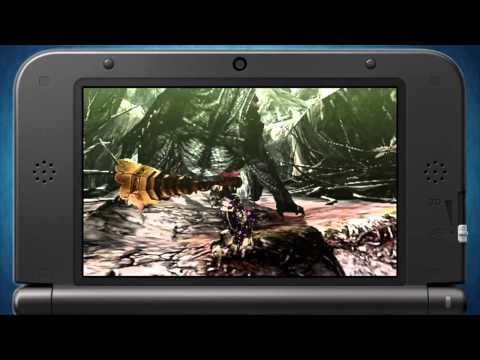 Family guide to Monster Hunter 4 Ultimate, from what’s great to what to watch out for this is the ultimate 2 minute guide.

Monster Hunter 4 Ultimate is an action role-playing game set in a grand fantasy world filled with extraordinary monsters. Taking on the role of a hunter in this story-led adventure, players will explore new lands and towns in search of glory and the bountiful rewards that come from defeating each of the game-world’s monstrous foes.

The player’s movement is controlled by the circle pad, with the console’s buttons triggering various actions depending on whether you’re exploring the world or locked in monstrous combat. The New 3DS has the added ability to control the in-game viewpoint with the nub, which works similarly to a second circle pad.

The game supports single and multiplayer modes with players teaming up in a family friendly multiplayer mode to go on group hunts, exploring together and combining their skills to help them take down even more challenging monsters.

Although more of an open world roleplaying game, Dragon’s Dogma, is the most recent game to have drawn close comparisons to the Monster Hunter series, with similar combat against fearsome monsters.

A strong story has never been a key ingredient to the Monster Hunter series, but Monster Hunter 4 Ultimate changes this substantially, with the player joining a caravan to journey all over the world searching for information about mysterious relics linked to the monsters they are fighting.

Monster Hunter 4 Ultimate is developed by Capcom, who are most well known for the Street Fighter and Resident Evil games.

Players can expect a serious challenge from Monster Hunter 4 Ultimate, but it’s the most user friendly entry in the series and can easily provide over hundreds of hours of gameplay from both single and multi-player modes.

In the UK and Europe, PEGI rates Monster Hunter 4 Ultimate a 12 for frequent fantasy violence and infrequent strong language.

The GRA expands on its PEGI details by saying “Mild violence appears frequently in the game, in fantastical and realistic guises. Realistic-looking violence towards fantasy characters is common. Hunters can attack monster which are not a threat to them. They will fall and writhe as if they were real animals, then they go limp.”

“The majority of violence is accompanied by exaggerated blood effects. This applies to humans and animal-like creatures as well as monsters. However, even though humans and animals may appear to bleed, violence towards them is often accompanied by minimal reactions, light, stars around their heads or clouds. In many cases, the hunter will simply flinch or get back up, unharmed. When they are defeated by an enemy, they simply faint to the ground – unrealistic considering they have just been mauled by a gigantic beast. They are then carried back to town by anthropomorphic cats and awoken.”

“There is the use of the word ‘crap’ in the game.”
http://www.pegi.info/en/index/global_id/505/?searchString=Monster+Hunter+4&agecategories=&genre=&organisations=&platforms=&countries=&submit=Search#searchresults

In the US, the ESRB rates Monster Hunter 4 Ultimate for a Teens audience, with content descriptors for blood, crude humour and fantasy violence.
https://www.esrb.org/ratings/synopsis.jsp?Certificate=33729&Title=MONSTER%20HUNTER%204%20ULTIMATE&searchkeyword=MOnster%20Hunter%204

At it’s core, Monster Hunter is a series of high adventure, but the game is built around it’s combat, with almost everything else a secondary consideration.

Although there is plenty of satisfaction to be gained from helping characters within the game, players are primarily driven by the glory and rewards of defeating fearsome monsters, either working alone or in a team, where careful planning and strong communication are key.

Each entry in the Monster Hunter series has built on the last, but Monster Hunter 4 Ultimate is perhaps the greatest entry to date, adding online multiplayer, more diverse locations, new monsters to hunt, weapons to craft and fighting moves to unleash. The vertical aspect of combat that is introduced in this game, changes things significantly, providing a nice variation over previous titles.

Existing fans of the series will certainly feel at home here, but new players have a lot to enjoy as well, with far more refined and well structured tutorials to ease you into the game. However, a Monster Hunter game would be nothing if it were not a challenge and mastering the varied weapons and fight moves is the driving factor behind the series ongoing success.