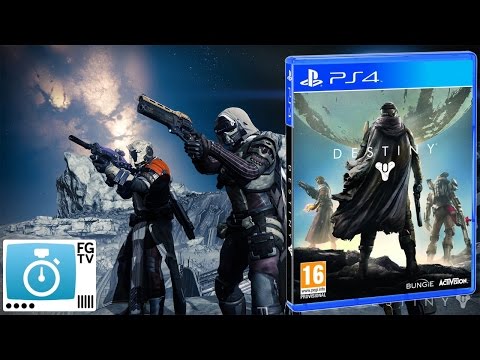 2 minutes with everything that mums and dads need to know about the new Destiny game on PlayStation 3, PlayStation 4, Xbox 360 and Xbox One. Why it’s great and what to watch out for.

1. Genre and story:
Destiny is an online multiplayer first-person shooting game. With its requirement that you always be connected to the Internet to play it’s somewhat similar to a massively multiplayer online game (MMO) like World of Warcraft, but because other players come into your game through a matchmaking system rather than always being present on your server, the developers instead refer to it as a “shared-world shooter”.
That shared world is a post-apocalyptic science fiction version of our future, in which human beings have colonised other planets only to have those colonies fall during an event called “the Collapse”. Those survivors left on Earth – protected by a mysterious large white sphere called The Traveler that also gives some, called Guardians, special powers – now face the task of repopulation with the additional threat of unfriendly aliens.

2. Developer:
Destiny is the first new franchise from developer Bungie since it created the Halo series in 2001.

3. Format:
Destiny is currently available for PS4, Xbox One, PS3, and Xbox 360. Those who want to play together will have to own the same version of the game.

4. Cost:
On the digital stores, Destiny costs £54.99 for the PS4 and Xbox One, and £49.99 for the previous-gen versions. To play certain aspects of the game on PS4, Xbox One or Xbox 360 there’s an additional cost for the subscriptions that let you play games online: PlayStation Plus and Xbox Live Gold.

It should be noted that Destiny has cost a lot to make and will be heavily advertised and marketed. If your child plays games, they will hear about it and might find a degree of peer group pressure to play it.

5. Length:
Destiny has a plot but also features events and other things to do that will keep people playing for a long time. Whereas Halo had a campaign of a certain number of hours and then relied on the separate multiplayer modes to keep people coming back, Destiny ties these in together. The story will be ongoing, and multiplayer will feature throughout.

6. PEGI/ESRB rating:
PEGI (http://www.pegi.info/en/index/) rates Destiny as only appropriate for those who are 16 or older, with content descriptors for Violence and Online play, stating that Destiny “contains frequent moderate violence”.
The ESRB (http://www.esrb.org/ratings/synopsis.jsp?Certificate=33513&Title=Destiny) gives Destiny a rating of T for Teen, with content descriptors for Animated Blood and Violence, and an additional note that the game “includes online features that may expose players to unrated user-generated content”. The description goes into detail on some of the combat methods, e.g. “pistols, shotguns, rocket launchers, and special powers”, and “hand-to-hand combat and knife stabs”, and points out that combat is accompanied by “cries of pain and realistic gunfire” and blood-like black or white liquid when taking on aliens.

7. Additional Consumer Information:
The Games Rating Authority (http://gamesratingauthority.org/pegi/search_aci.html) expands on their PEGI rating by explaining that although you mostly kill aliens, during multiplayer “it is possible to kill humans wearing futuristic armour”, and “they react and die as you would expect in real life and their bodies can be seen on the ground before characters ‘re-spawn’.” The Games Rating Authority also mentions the “real-time interaction with other players”, which always carries the risk of exposure to bad language or abuse.

8. Common Sense Media:
Common Sense Media (https://www.commonsensemedia.org/) gives Destiny a “suggested target age of 14″, stating that while “it’s not nearly as gritty or gory as Call of Duty”, it does heavily feature “combat with guns and the occasional melee blow or stab and a bit of alien (not red) blood”, though “it’s not as visually intense as most shooters” and “the combat is sci-fi and mostly against aliens in co-op.”

9. Themes:
Destiny paints a bleak picture of one potential future of humanity, in which we achieve the technological progress needed to colonise other planets in the Solar System but are then nearly wiped out. It’s a story of survival and heroism on the human level but also has mythic or potentially religious themes with the mysterious magical protector called The Traveler.

10. Why people play:
The success of the Halo series ensures that Destiny has an interested audience from day one, but what will keep those players coming back and bring in new ones is a combination of the story, how it feels to play (how satisfying the movement and combat, how believable the enemy AI), and the multiplayer. Whether people play with existing friends or make new ones it’s that social aspect that will make it an online world they want to spend time in.