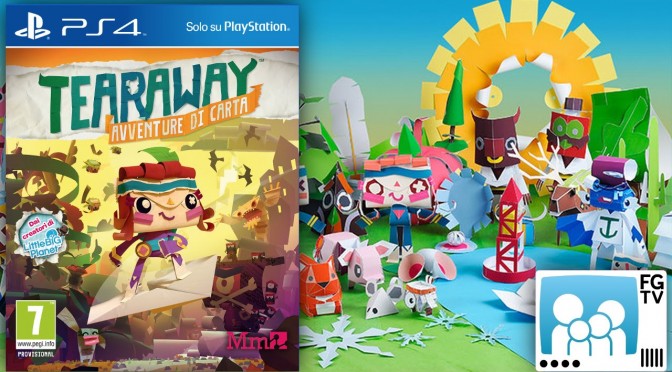 1. Genre
Tearaway Unfolded is a PS4 game described as an “expanded retelling” of the Vita game Tearaway. It’s a platforming game where players have to navigate levels and overcome obstacles.

In Tearaway Unfolded, the world and characters are made of paper, and interactions with the game revolve around this. You do things like swipe the touch pad on the DualShock 4 controller to send a gust of wind into the game, or point the light bar at the screen to light the way. At times objects appear to be thrown inside the controller and audibly rattle around before being flung back into the world.

Like Tearaway, Tearaway Unfolded has printable papercraft that you can put together in real life, which are good for families. Also good for families is the companion app that lets a second player help the first by drawing

Obviously Tearaway Unfolded is most similar to Tearaway, but its handmade aesthetic is also reminiscent of LittleBigPlanet from the same developer.

2. Story
In Tearaway Unfolded, a messenger called either Atoi or Iota has a message for you, the player, and you have to help them get through the papery world so they can deliver it to you.

3. Developer
Tearaway for Vita was developed by LittleBigPlanet developer Media Molecule, but a studio called Tarsier helped to bring it to PS4.

5. Duration and Difficulty
Tearaway for Vita took around eight hours to complete. The PS4 game will take longer.

Although offering a challenge, Tearaway is not designed to be super difficult. Less experienced and younger players will be able to enjoy it unaided.

6. UK Rating
In the UK and Europe, PEGI rates Tearaway Unfolded as only appropriate for those aged 7 and older, for pictures or sounds likely to be scary to young children, apparently including “some dark overtones and creepy settings where monsters can jump up and potentially scare younger players”. This is a higher rating than Tearaway for Vita, which was rated PEGI 3.
http://www.pegi.info/en/index/global_id/505/?searchString=tearaway

7. Other Ratings
In the US, the ESRB rates Tearaway Unfolded E for Everyone (http://www.esrb.org/ratings/ratings_guide.jsp), with content descriptors for Mild Cartoon Violence. It explains that “damage is indicated by small comical yelps” and that “enemies disappear in bursts of confetti when defeated”.
http://www.esrb.org/ratings/synopsis.jsp?Certificate=34009&Title=Tearaway%20Unfolded

8. Themes
There are monsters in Tearaway Unfolded, but since they’re made of paper they aren’t as scary as they could be.

As well as helping your messenger, you also help other characters you come across in the game. There’s also the opportunity to express your creativity through designing papercraft objects to place in the world.

9. Why people play:
People play Tearaway because it’s different from other games. Its papercraft world and characters are unique, as are the mechanics through which the player gets to interact with that world and the way the player is involved in the story. Its charm appeals to players of all ages.