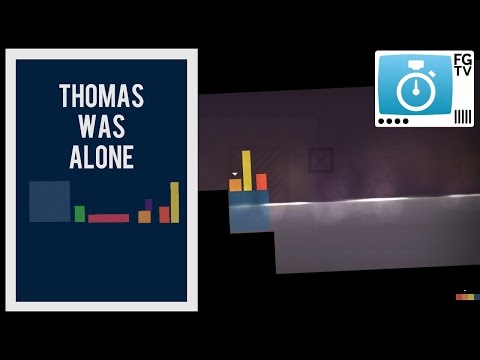 Welcome to Family Gamer TV’s 2 Minute Indies. From what makes this game so enjoyable to what to watch out for, here is your ultimate guide to Thomas Was Alone.

1. Genre and Story
Thomas Was Alone is a single player, 2D platform game where you control of a number of rectangles of different shapes, sizes and abilities to jump across platforms, climb surfaces and progress through levels.

The game’s story, narrated with a dry humour, tells the tale of the emergence of a set of self aware computer programs – beings born fully aware, but knowing nothing besides their own existence. We see and hear them interact and grow as friends on a journey to find meaning and purpose in the world around them. While the characters and their interactions are played for humour, the plot itself remains fairly serious throughout.

Thomas Was Alone features a robust and varied selection of characters, from Claire who is convinced she is a superhero, to Chris whose small size gives him something of a napoleon complex, there are a variety of characters for players to play as and empathise with.

Each of these characters have their own unique attributes that make them suited to some challenges, but unable to complete others unaided. Tall characters are able to jump much further in a single jump but are unable to enter smaller areas for example, and characters that are skilled at helping others make large jumps may need help getting through even the most simple platforming sections.

2. Developer
Thomas Was Alone is the first video game to be released by Indie Developer Mike Bithell, who is releasing a stealth action game called Volume in 2015 which is set to contain voice acting from actor Andy Serkis.

3. Format
Thomas Was Alone is available now on Steam, PS3, PS4, Vita, Xbox One, Wii U, iOS and Android.

5. Duration
Thomas Was Alone is a single player game only and should take the average player around four hours to complete. There are some hidden collectables in the levels to find, but these do not unlock anything and mainly serve to give more skilled players more of a challenge.

6. UK and Europe – PEGI
In the UK and Europe PEGI (http://www.pegi.info/en/index/global_id/505/?searchString=thomas+was+alone&agecategories=&genre=&organisations=&platforms=&countries=&submit=Search#searchresults) rates Thomas Was Alone as a 12, with content descriptors for mild bad language.

The Games Rating Authority (http://gamesratingauthority.org/pegi/search_aci.html) expands on the game’s 12 rating by explaining that it contains “Infrequent, Mild Language”, citing uses of “Damn” and “Hell” in the narration.

7. US – ESRB
In the US, ESRB (http://www.esrb.org/ratings/search.jsp) rates the game across all platforms as E for Everyone, with content descriptors for mild fantasy violence and mild language.

8. Common Sense Media
Common Sense Media (https://www.commonsensemedia.org/game-reviews/thomas-was-alone) gives Thomas Was Alone a suggested age rating of 10+, citing that it “employs a narrator to tell a story rich with humor and emotion and filled with basic but enduring lessons about friendship and human relationships.Some parts of the story may be too abstract or emotionally complex for younger kids to fully grasp”.

9. Themes
Thomas Was Alone focuses on themes of friendship and finding your place in the world, but does so in a way that is safely digestible for younger players. It tells a touching story of a group coming together and their journey through the world.

Having the characters represented as geometric shapes creates a canvass of personalities for players to relate to. I unexpectedly found myself identifying with the different shapes and seeing aspects of people I knew in the cast, just through the simple abstract presentation.

Players sensitive to being isolated or separated from loved ones may find the story more emotional. At one point an enemy separates the characters from each other one by one, leaving the player alone and separated from their friends.

10. Why People Play
The simple design of Thomas Was Alone makes the game accessible to gamers and non gamers alike more accessible than other narrative driven video games. The steady difficulty level ensures anyone interested in it’s story to play it to completion.

While Thomas Was Alone initially shines through its integrated music, narrative, characterisation and interactions, the real genius is its ability to make you care deeply about the fate of a group of faceless, voiceless, coloured shapes. Their search for friendship and meaning soon involves the player in an adventure that is as deep as it is simple.