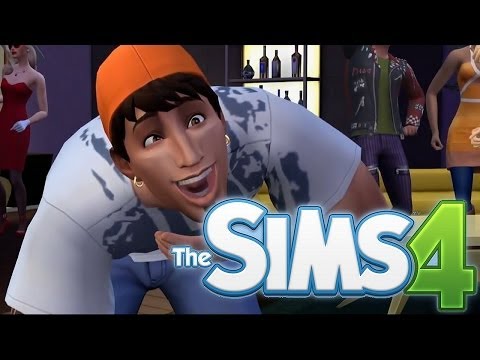 One thing I hoped to see at E3 this year was footage of The Sims 4 in action (maybe even Swimming Pools and Toddlers) not just the Create-a-Sim mode or the build mode but the actual moment-to-moment play complete with menus and mouse clicks. Unfortunately, we didn’t really get to see what the game will actually be like to play, but The Sims 4 was part of EA’s big press conference, so I’m going to run through what we saw in that demonstration and what it might mean for the game when it comes out in September.

The main feeling I got from Executive Producer Rachel Franklin’s well-rehearsed description of the footage was an emphasis on weirdness:

“The stories you’ll tell about these Sims will be entertaining, meaningful, and sometimes a little weird.”

The Sims has always been quirky, but at its core what makes it interesting is how it simulates real life. I prefer when weirdness emerges naturally from that simulation rather than when it’s brought in through the addition of things like supernatural beings.

The quick demonstration of Create-a-Sim was a good example of that quirkiness emerging naturally, as the player used the new, supposedly more intuitive grab-and-pull tools to create a Barack Obama lookalike. This is what is so great about The Sims as a series: the developers provide the tools for simulation, and the players use those tools in creative ways.

We also got a glimpse of The Sims 4’s approach to personalities. Unlike in The Sims 3, where a standard adult Sim has five personality traits, here each Sim has three — ambitious, outgoing, and perfectionist in Obama’s case — plus an ambition/goal that comes with a fourth supplementary trait. It’s not clear whether that trait is activated when you choose the goal or when the Sim achieves it, but it’s an interesting way to tie their personality into what they want to get out of life.

Next, a few clips show different Sims out and about, and Franklin talks about “lively, vibrant neighbourhoods”, plural, which will probably — as with The Sims 3 — mean that extra neighbourhoods will be available as purchasable downloadable content (DLC). One of the Sims we see in this run of clips is fishing, which suggests that the fishing skill will be part of the base game and not come in an expansion pack as it did with The Sims 3.

The gym sequence, which is where we’re introduced to “hothead” Chuck, is an opportunity for Franklin to talk about the new emotions system works. Some Sims on the running machines are happy, some are depressed, and presumably their moods affect how effective their workouts are. Chuck probably finds his anger an advantage when it comes to working out, though what made him angry is another example of that exaggerated weirdness. I’m curious about the poetry skill that he supposedly lacks — will it be a hidden skill or one learnable from books like cookery? — but not sure how I feel about his terrible verse causing Gladys to start a fight.

I do like that Gladys’ “foul mood” brings everyone else down when she crashes the party, since that’s something we’ve all seen happen in real life. Mostly, however, this party seems like an opportunity for Franklin to show off the Gallery, a way to download Sims and other content from other players and presumably straight from the developers (whether for a price or not we don’t yet know). It looks intuitive, and if bringing a new Sim into your game really is instant — as it seems to be in the demo — then I’m on board.

The end of the demo, however, fell a bit flat for me. Having Chuck die from laughter was obviously EA’s attempt to make people laugh, the appearance from the beloved Grim Reaper a way to court nostalgia, but it was too much like forced weirdness for me. Will death by laughter be adequately forewarned in the game? Or will I spend hours working on a particular Sim only to have them keel over when I’m not looking? I guess I’ll find out on September 2nd.