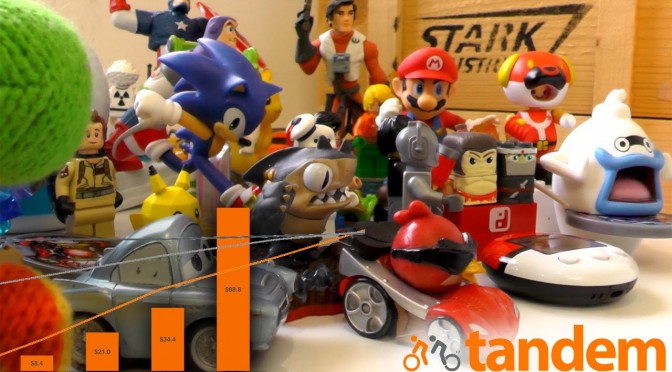 We talk to Nick Mayberry and Doug Renert of Tandem Digital who have been studying the connect and toys to life space as investors.

I spoke to Doug Renert, co-founding partner of Tandem Captial, asking him what their report had uncovered in this space?

“Technology is driving a new set of toy experiences and companies are taking advantage of this. Also, there are new ways to monetise in the toy space. Finally there are new methods of distribution taking play from the app to the toy space. This all bodes well for start-ups and new comers to the market.”

Nick Mayberry, director of content at Tandem, expanded on this picture through the year. “We hear about connected toys often around the holiday season, what happened in 2015 is that consumer interest as measure by Google Trends extended beyond the holiday season. Tech becomes a fundamental of play rather than a gimmick.”

“In our research we discovered that the toys to life category was underfunded compared to other categories. An opportunity for big large scale businesses to grow from that into cross-media rather than just connected toys.”

Of course this was a feature of Activision launching Skylanders very much attached to the Spyro brand and character. Since those early years it has eclipsed the diminutive dragon but it seemed an important connection to begin with.

“We put Anki in the robotics category because of the car’s artificial intelligence that learns the tracks. Sphero is another company in this space, who have a strong relationship with Disney and links to BB-8.”

“A nimble start-up is going to have to prove their business model before they get access to that capital, while larger companies have more resources. The winners at the end of the day will have amassed the capital to build out big brands one way or another.”

“Some of it depends on innovation. Having started with a single figure that opened an iPad game, but now we are seeing the ‘brains’ be put into the figures themselves that then impacts on the game. The games are also becoming more complex with in-app purchases. Add-ons are also happening on the toys themselves where buying additions will open up new possibilities in the virtual world.

Summing up Renert reiterated the opportunities here. “I don’t see this slowing down I see it picking up. I don’t think there will be 20 winners. The business for the small handful of winners will continue to grow.”