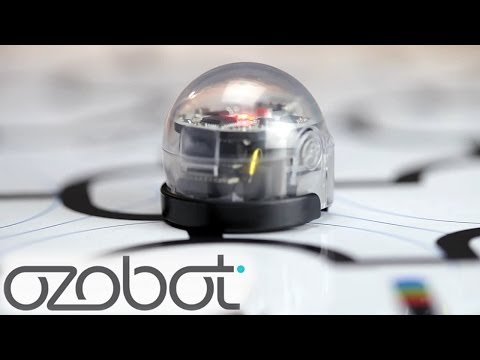 We get a tour of Ozobot with CEO Nader Hamda. What at first appears to be a simple safe contained robot soon becomes an intelligent board piece.

The diminutive Ozobot will track lines to follow a path. Nothing hugely revolutionary there, but Ozobot takes things further by reading different coloured codes on the line to adjust its behvaiour: speed, direction, path finding.

This combines with a variety of physical and iPad app games to create a product that crosses over traditional game-toy lines. It can also do this physically, travelling seamlessly from a circuit on the iPad onto a physically drawn path — again opening up new game-play mechanics.

With over a million different code combinations the little robot can be used in all sorts of different scenarios. A couple we looked at were an Ozorace where players applied different abilities to their robot while on the iPad section. The racers then follow the tracks off the tablet and around the room as they play out these instructions.

Another game we tried was like Pipe Mania, but with a physical player token. Each player takes turns to lay track tiles of different shapes to try and move the Ozobot to their destination. While the presence of the robot is not an integral part of the game, having a physical token like this is engaging to a wider audience and substantially changes how the experience feels.