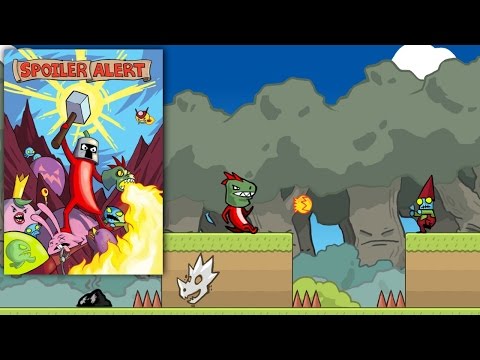 Spoiler Alert is an indie game that takes the conventions of a Mario style adventure and plays them entirely in reverse. I’m here to tell you everything you and your family need to know about the game.

It’s a side-scrolling non stop runner game, imagine Mario, but he’s always running and you just controll when he jumps, recently released on PC, Mac, Linux and Android Phones, but not iOS devices as of recording this video. The game currently costs £1.99.

Spoiler Alert starts on the last level of an adventure, allowing players to defeat the final boss and rescue the princess, before making you play the game in reverse from last level to first. Players are expected to undo all of their actions from the adventure; jumping on dead enemies to bring them back to life, catching launched projectiles as they’re thrown and generally undoing the actions traditionally done in this type of adventure game.

In Spoiler Alert many of the levels you play through involve finding cartoon enemies already dead, and task you with finding out how to undo killing them. Enemies that were killed by being jumped on in a Mario game style will appear in levels slumped on the ground with x’s for eyes. By jumping on their bodies you can undo killing them, meaning that they spring back to their feet and return to walking back and forth along the level.

Enemies killed by fireballs will appear first as piles of smoke, then as cartoon figures on fire, running back and forth in distress for a couple of seconds, after which the fire will leave them and return to the player, who has to undo throwing the fireball. Enemies killed by thrown hammers appear on the ground much like those jumped on, and require you to catch the hammer and undo throwing it, much like the fireballs.

Spoiler Alert is a really enjoyable game because it challenges players who have played a lot of platforming adventures to un-learn a lot of what comes naturally. Having to avoid coins, avoid killing enemies that are alive and bringing enemies back to life goes against a player’s instincts, which creates a real challenge. Many times I had to restart a level because I out of instinct tried to kill an enemy, before remembering that would cause me to fail.

Spoiler Alert features between 30 minutes and an hour of content in it’s story depending on your level of skill as a player, but also contains tools for creating your own new levels. While these tools are accessible and robust, there are currently very few user created levels available for players to download.

Spoiler Alert is rated by retailer Amazon as being suitable for “All Ages”.

Thanks for watching our 2 minute guide to Spoiler Alert, we’ll be back with more Indie games soon. If this is your first Family Gamer TV video don’t forget to subscribe so we can let you know when our next video is live.

About Family Gamer TV 2 Minute Indies
Laura Dale (@LauraKBuzz) will be exercising her not inconsiderable expertise and passion for indie games each week. She also runs a website called www.IndieHaven.com (@Indie_Haven) so go check that out too.

Indie games are small games made by smaller teams of just a few people, that trade big budget production values for experimental new ideas. Indie games are great for families because they generally have a much smaller price tag than boxed retail games and are able to cater to more specific audiences than blockbuster releases.