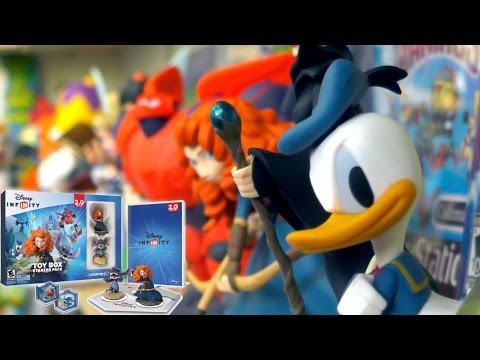 Here’s our first look at the Disney Originals toys and figures in the studio. We unbox the full set and get each in front of the camera.

For players who already have purchased the 1.0 version of the game a new downloadable upgrade is more cost effective. This enables you to access the 2.0 Toy Box mode without buying a starter pack. The 2.0 download is available on PlayStation Network, Xbox Live, and the Nintendo eShop for $29.99, with an introductory price of $19.99 on PSN & eShop.

Players simply reuse the base, figures, and Powers Discs they already with the new and enhanced 2.0 Toy Box. This then opens the door to new figures and game-making items from the Marvel and Disney universe, including The Avengers, Guardians of the Galaxy and Spider-Man brands.

The full set of Disney Original figures are also now available separately and include Stitch, Merida, Aladdin, Beymax, Hiro, Tinkerbell, Maleficent and Donald Duck. These don’t come with an associated Play Set adventure campaign but can, again, be used in the 2.0 version of the Toy Box.