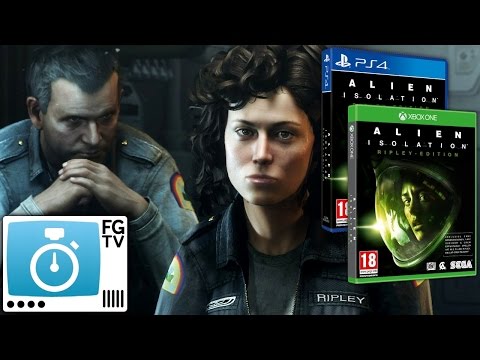 Here’s everything parents need to know about Alien Isolation. From why it’s so good to what to watch out for here’s the ultimate 2-min guide:

1. Genre and story:
Alien Isolation is a science fiction horror game based on the Alien film series. It’s a single player game played from a first person perspective, and the player must survive the deadly presence of a xenomorph. Unlike in previous Aliens games the alien itself cannot be killed, and the player must hide and evade the alien to survive.

You play as Amanda Ripley, daughter of Sigourney Weaver’s character from the movies, searching for your missing mother on a space station that has descended into chaos. As well as the alien to avoid there are human and android enemies to fight, although combat is a minor part of the game and long periods can pass without combat or direct conflict.

5. Length:
Alien Isolation should take around 18 hours to complete, although skilled players may be a couple of hours faster, and to fully explore every corner of the game may take considerably longer. As the encounters with the alien, humans and androids in the game are often driven by artificial intelligence rather than scripting, replaying the game will provide different scenarios.

6. UK and Europe – PEGI rating and additional consumer information:
In the UK and Europe PEGI rate Alien Isolation as suitable for the over 18s only, with content descriptors for extreme violence and strong language. PEGI states that ‘Although the objective of the game is to avoid the alien, when you do have an encounter that you cannot escape from, the alien can kill the player and other characters in a graphic manner. Typically this is where the alien’s large claws are stuck through the back or abdomen, then come out the other side. This is accompanied with realistic depictions of blood and gore.’
http://www.pegi.info/en/index/
http://gamesratingauthority.org/pegi/search_aci.html

7. US – ESRB:
In the US the ESRB rate Alien: Isolation as M for Mature, unsuitable for under 17s, with content descriptors for blood, strong language and violence. The ESRB state that in the game players ‘use shotguns, pistols, bombs, and flamethrowers to kill alien creatures; androids can be dispatched by being shot, set on fire, or blown up. When Ripley is spotted by an alien, a short cutscene depicts her getting knocked down and bitten in the face, or stabbed through the chest with a spike. Blood is depicted when players are impaled; several corpses can be seen lying in pools of blood during the course of the game.’ The ESRB also state that the words ‘shit’ and ‘fuck’ are used in dialogue.
http://www.esrb.org/ratings/synopsis.jsp?Certificate=33581&Title=Alien%3A%20Isolation

8. Common Sense Media:
US lobby group Common Sense Media states that Alien: Isolation ‘isn’t for younger players, primarily for the large amounts of violence, blood, and gore, but also because of horror elements; players will be hunted by aliens that will respond to their every mistake and will track them down, with graphically shocking results.’ It also goes on to say that it isn’t just the gore that may disturb younger players, but the level of tension and stress in the game.
https://www.commonsensemedia.org/game-reviews/alien-isolation

9. Themes:
Alien Isolation revisits the theme of a cold, hostile universe as shown in the movies, as well as the deadening effect of a corporate dominated future in the derelict space station Sebastapol. There’s also a revisiting of the feminist themes of the Alien films with Amanda Ripley following in the footsteps of her mother.

10. Why people play:
Alien Isolation restores the sense of fear and forboding that existed in Ridley Scott’s original Alien movie, partially by giving the alien itself it’s due. After years of being cannon fodder for anyone with a plasma rifle in numerous shooters, this alien is impossible to kill for most of the game and must be avoided at all costs. Combine this with visuals and music that evoke the late 70s vision of the future seen in Scott’s film and Alien Isolation washes away the bitter taste of recent gaming disasters featuring the xenomorphs.