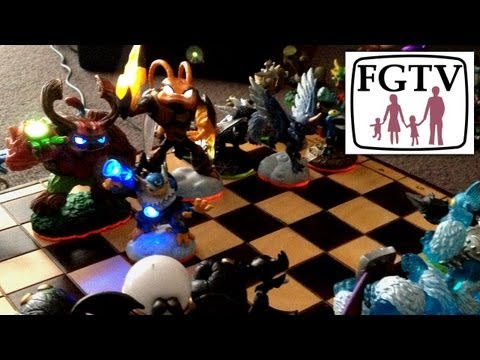 With Skylanders Swap Force needing a new Portal of Power, here’s my children’s solution for what to do with your old Skylanders Giants and Spyro’s Adventure portals. They extended their version of Skylanders Chess to include Portal powered hot spots that light up Light-Core figures.
Rules——-
Two sides are setup on the dark squares of a checkers board, each player picks two elements to use as their Chess pieces. Each side needs at least seven pieces although this can be supplemented if necessary. The following pieces have special abilities, otherwise the game proceeds like Checkers:
– Flight: Winged figures like Spyro can move two squares in a straight line.
– Giants: Can move two squares in and turn corners.
– Shoot: Figures with guns like Trigger Happy can eliminate another piece (in line of site) rather than moving.
– Bomb: Area effect characters like Eruptor can eliminate all piece around them in a two square radius.
– Light-Core: When they are illuminated they are safe for two rounds.