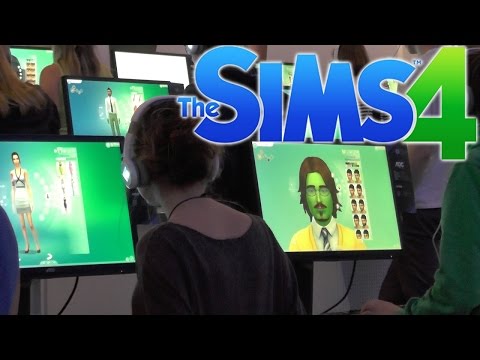 The Sims 4 has a special relationship with Gamescom, a huge games industry event that takes place every year in Germany, since last year – Gamescom 2013 – was where EA first showed gameplay footage of the game. Family Gamer TV was there this year too, to check out the game now that it’s only a few weeks away from its September 2nd (or 5th, if you’re in the UK) release.

While the rows and rows of occupied machines shown here are all running the Create-a-Sim demo that is now available for free through Origin, the new and improved Build Mode was also available for some attendees to try for themselves, and we have footage of it in action. You can see the player dragging the see-through walls of a room, outlined in white so that you can really see what’s going on, to make that room bigger without having to delete the wall and build another one further out. The cleverest thing about this is that objects within the room will automatically move too, in a way that makes sense; if you’ve got a sofa backed up against the wall, it’ll move back with the wall rather than leave a gap.

At the bottom of the screen on this Build Mode demonstration you can see another new feature: prebuilt rooms. If your Sims need an extra bathroom and you can’t be bothered to build it, you can just grab a prebuilt one from the menu and attach it to your house. This kind of modular building is perfect for players like me who don’t want to spend hours designing and building a house, and would rather just get on with the business of playing.

Those who are builders, however, will be able to get into the fine detail of the houses they build. There’s no Create-a-Style tool in The Sims 4 as it ships (though we may get one in an expansion pack), but you can colour individual sections of roof or wall as you see fit, which was demonstrated on stage at EA’s press conference when Peter Moore wanted his football stadium house painted the colours of his favourite team. You can even make walls of different heights, for a cramped old cottage or a spacious mansion, and place windows higher or lower to get just the look you want.

Most of us will have to wait to try the new Build Mode until the game comes out, but the Create-a-Sim demo should give you some idea of how intuitive the developers want it to be for players to express their creativity in the game. As you can see from the rows of players giving it a try at Gamescom, Create-a-Sim allows you to make Sims of all sorts of shapes and sizes and skin colours (even green). There may not be a Create-a-Style tool in the base game, but there should be plenty of outfits to choose from, and the clever new way hats can fit over different hairstyles and boots can fit over or under different clothes should allow for more variety.

Of course, as the symbols on the walls behind the players suggest, it’s not really looks but personality that counts, and we won’t really get to see how those personalities affect our Sims lives until The Sims 4 comes out next month. Subscribe to Family Gamer TV to get our review once we’ve got hold of the game for ourselves.