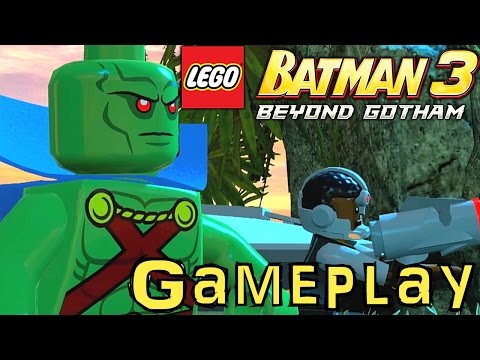 In our latest look at Lego Batman 3: Beyond Gotham, we leave The Watchtower behind and head into the far reaches of the galaxy as The Justice League race to take down the evil Brainiac and stop his plan to capture the Lantern Worlds. Martian Manhunter, The Flash and Cyborg have been sent to Odym, home of the Blue Lantern Corps, after receiving a distress call from Saint Walker, the first Blue Lantern.

Odym is under siege from the nefarious Reach and our heroes have to dispatch one of their insect like drop ships before they can head down to the planet. Here we see the new 2D shoot-em-up game-play, introduced in previous footage with Batman and Robin and their assault on The Watchtower, but this time the team are piloting the famous Javelin-7, spacecraft of The Justice League.

Once the drop-ship is taken care of, it’s down to Odym’s surface where we see more traditional Lego game-play, with a familiar blend of action and puzzles, but this time set in a lush, vibrant world. Odym is a beautiful looking environment, but The Reach and their minions have taken control and it’s down to The Justice League to dispatch them as they attempt to find Saint Walker.

With the enemies vanquished, we get a chance to see a Blue Lantern using his Power Ring for the first time, before The Justice League head off for more adventures on other Lantern Worlds.