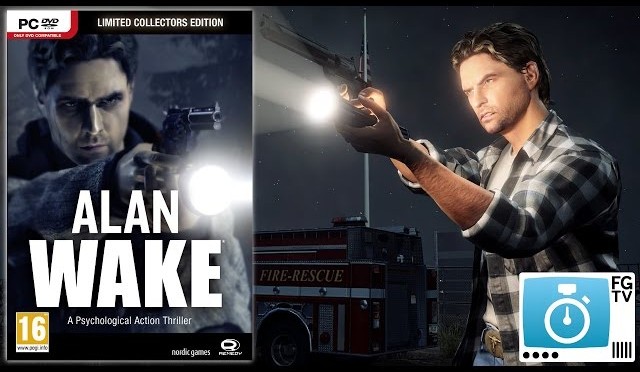 We look back at Alan Wake, from what makes this game great to what to watch out for here’s the ultimate 2 (or 3) minute guide:

Alan Wake is a horror action game originally released for XBox 360 in 2010, with a PC release the following year. You play from a third person perspective, controlling thriller writer Alan Wake as he tries to find his lost wife in the seemingly idyllic town of Bright Falls.

The action begins at night time, with enemies shrouded in shadows haunting the forests around the town, and as Alan explores he has to fight them off using light to dispel their protective shadows and conventional weapons for the kill. This unique torch-and-gun juggling combat increases the pressure, while there’s a real sense of wilderness and danger to being lost in the forest at night.

The game’s open world design was dropped in favour of a more led experience but still contributes to the substantial feel of Bright Falls which is reminiscent of Twin Peaks. This creepy atmosphere makes Alan Wake memorable even five years after release.

Although a full sequel has yet to be commissioned, two downloadable chapters continued the game’s story, and the faster paced mini-sequel Alan Wake’s American Nightmare offered a more action-oriented follow up.

The gameplay is more challenging than a straightforward horror shooting game like The Darkness 2, but does not reach the intense pressure for survival of The Evil Within.

Alan Wake was developed by Remedy Entertainment, best known for creating Max Payne, and released by Microsoft. Remedy and Microsoft are collaborating on forthcoming XBox One title Quantum Break.

Alan Wake is available for 360 on disc or digitally, and on PC via Steam. It costs £14.99 on the 360 Marketplace, and bundled on Steam for £29.99. As with many older digital releases, keep an eye out for flash sales and offers.

The GRA expand on their PEGI details by saying that realistic violence can be found in 2 of the cutscenes, both containing characters being punched in a realistic manner. There are also a few cutscenes which imply that people are injured horrifically, e.g. being killed with an axe, however these are only implied as the act is never seen. The game contains mild expletives only (“Shit, God damn”).
http://www.pegi.info/en/index/global_id/505/?searchString=alan+wake

In the US the ESRB rated Alan Wake ‘T’, suitable for teens, with content descriptors for blood, language, use of alcohol and tobacco and violence.
http://www.esrb.org/ratings/synopsis.jsp?Certificate=28770

Lobby group Common Sense Media considers the violence in Alan Wake to be less sustained or graphic than in other shooting games, and also highlights Alan as a moral character who will prefer to flee rather than seek confrontation.
https://www.commonsensemedia.org/game-reviews/alan-wake#

Alan Wake explores, sometimes heavy handedly, themes of creativity and insanity, with fact and fiction blurring as Alan’s writing affects the world around him, and vice versa. As well as collectible pages from a book that predicts future events in the game, there’s further commentary on the action from radio shows and TV episodes that Alan can watch and listen to as he explores.

Combined with the night time setting, and the disorientation of roaming large open spaces in the dark, this gives the game a dreamlike, disturbing feel. This intensifies further in the two surreal downloadable chapters and in American Nightmare.

Horror stories about authors losing their grip on reality have a long tradition, including Stephen King’s The Dark Half and John Carpenter’s movie In the Mouth of Madness, and Alan Wake adds a setting reminiscent of Twin Peaks with a dash of the Twilight Zone into the mix.

There’s no game quite like Alan Wake. It’s dialogue might be pretentious, Alan himself might be annoying, but it evokes a sense of atmosphere, of being lost in the wilderness at night and of dangers in the shadows, that hasn’t really been replicated elsewhere.

The use of light to strip away protective shadows, followed by using conventional weapons to deal damage, makes for unique, panicky combat, and players will often find themselves running for the safe haven of a light source, nerves jangling. Years later it’s still a unique game, and well worth checking out.