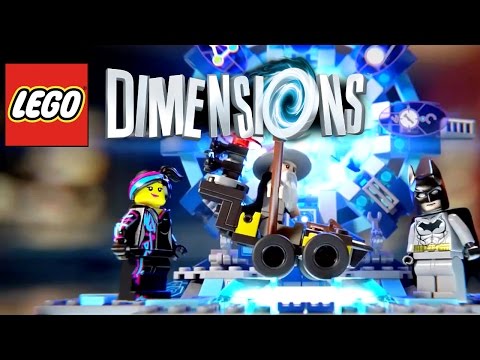 Coming this September, Lego Dimensions will line up alongside Skylanders, Disney Infinity and amiibo as the next game in the Toys To Life category, allowing Lego fans to use special minifigures and playsets inside a Lego game directly, for the first time. Lego have experimented with this form of play before with Lego Minifigures Online, but the inclusion of the Toy Pad bundled with every Dimensions starter pack connects the physical and virtual in a new way for Lego. Add in the ability to reuse and rebuild everything you buy and the opportunities for physical play present much more variety than the competition.

At the moment, Lego Dimensions looks to be very similar in style to Skylanders, with a story based adventure as the focus of the gameplay. Created by TTGames, the developers of Lego Marvel, Lego Batman and the upcoming Lego Jurassic World, you can expect a lot of action, adventure and humour. However, beyond that, Dimensions will allow Lego fans to finally take characters across worlds and also introduce new worlds, in the form of Back to the Future and The Wizard Of Oz. Why not take a Ninjago character for a spin in the Delorean Time Machine or use Wyldstyle to fight off horde of Winged Monkeys.

Lego Dimensions will be available on Playstation 4, Xbox One, Playstation 3, Xbox 360 and Wii U, retailing at around £99.99/$99.99 with additional packs available to expand the experience in a variety of ways.