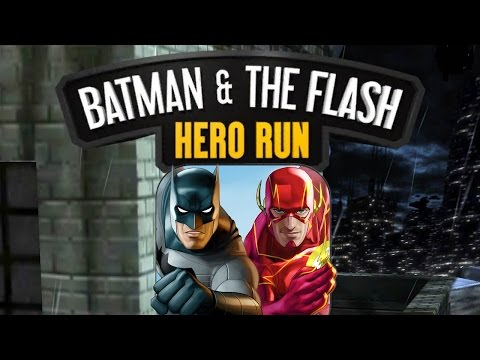 We get published comic author Mark Clapham to play through the first 15 minutes of the new Batman & The Flash Herorun game. Hillarity ensues.

Batman & The Flash: Hero Run is a new, free to play infinite runner game for iOS and Android devices.

That means running around an endless road, swiping and tapping to avoid obstacles, collect goodies and take out bad guys.

The Flash, fastest man alive, is a good choice for a running game, and this is a sound introduction to a character getting his own TV show this year.

It’s Batman’s home of Gotham City that’s most fun to run around though, with high contrast obstacles that are easy to see ahead and graphical flourishes reminiscent of the Arkham games.

Like most free games you can buy items and in game currency, but there’s no cooldown or recharge to stop frugal gamers playing without paying, making Hero Run an addictive freebie.