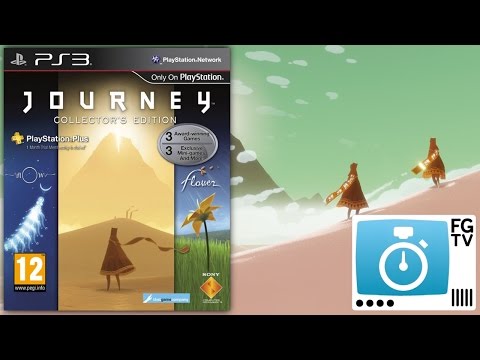 Our two minute guide about Journey. 10 things parents should know.

Journey is a difficult game to characterise. It involves landscape exploration and some light puzzle-solving, but its floaty movement is at odds with the “action adventure” label. Since the focus is on the emotional response of the player, some have called Journey an “art game”.

You play as a robed figure travelling through a desert towards a mountain, and there is a strong pilgrimage metaphor. A crucial element is the game’s ability to bring in another human player who is playing the same part of the journey as you. Although you can’t see the other player’s username or communicate with them other than via a chime and your movement, there is a strong sense of companionship created with non-verbal communication.

Journey was the third of three downloadable games indie developer thatgamecompany was contracted to make for the PlayStation 3, the first two being Flow and Flower.

Journey is currently only available on the PS3 but is due to come to the PS4 later this year.

Journey is a relatively short game. You can get to the end of the story in a couple of hours, or take a few more hours if you want to gather all of the collectibles. Thanks to those collectibles and things to discover, and just the general beauty of the world, Journey is a game that players may want to play through several times. Each time you replay the game, the player’s robes gain another pattern.

PEGI (http://www.pegi.info/en/index/global_id/505/?searchString=journey) gives Journey a rating of 7+ because of “non realistic looking violence towards fantasy characters” and “pictures or sounds likely to be scary to young children”, both of which likely refer to large creatures that appear midway through the game and must be avoided.

The ESRB (http://www.esrb.org/ratings/synopsis.jsp?Certificate=100318&Title=Journey&searchkeyword=journey) is more lenient, rating Journey as E for Everyone, with the only content descriptor one for “mild fantasy violence”.

Players need to be able to control the character using third person dual stick controls. This can take some time to learn for newcomers and suits children of at least 7 or older.

Common Sense Media (https://www.commonsensemedia.org/game-reviews/journey) suggests a rating of 10, though kids say it should be rated 5. According to Common Sense Media, “Parents need to know that Journey is less a video game and more a work of interactive poetry. Aside from a couple of scenes with ominous music and a flying stone serpent that might prove a little scary to very young kids, the game is safe and innocuous for all ages. It’s also very easy to play.” However, they recommend the game for those who are old enough to appreciate its “meditative and reflective” nature.

Perhaps what led Common Sense Media to call Journey “interactive poetry” is the extent to which it lends itself to interpretation. Journey seems almost like a religious work, from the style of the art, to the dream-like visual sequences in between levels, to the nature of the journey and its ending. This may well be lost on younger children who might see it instead as a short and relatively unchallenging game.

For older players, Journey is a unique experience. From the floaty way in which you move through the beautiful world to the gradual reveal of an interpretive narrative, this really is about the journey, and travelling through it with a stranger, without the need – or even ability – to speak, just makes it that much more meaningful.